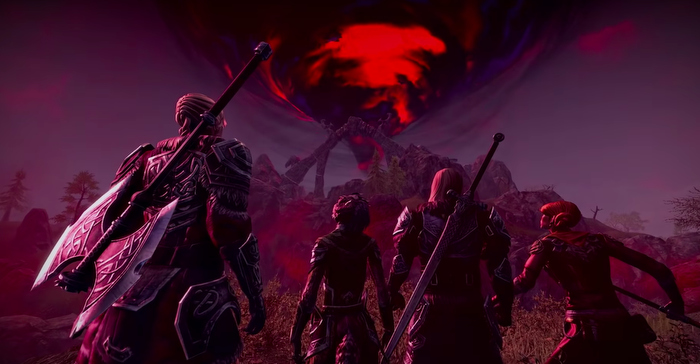 The Elder Scrolls Online’s Greymoor expansion has received a new trailer, and it sets up an epic journey where players will clash with what goes bump in the night.

Streamed through the official Bethesda Softworks YouTube account on Mar. 30, the trailer shows off some of what will transpire before and during the expansion’s story. Set in the Northern region of Skyrim, it sees Lyris Titanborn, a warrior of some renown, attempting to convince warriors to join her in quelling a rising threat laying siege to the land.

Townsfolk are being killed and twisted by evil forces. These malicious entities range from the familiar, like Falmer and Werewolves; to the more extraordinary, like Hellhounds and a dark being drawn from a massive surge of evil magic.

The only way to stop this threat is if the land’s greatest warriors – including the player – join forces and put a stop to this evil before it consumes everything, facing it down wherever it sprouts up and forcing it back from whence it came.

It’s a properly fantastical setup, and a great intro for those diving into the expansion’s Prologue trial event kicking off today on all platforms. The trial will cover the set-up for the expansion with a quest detailing just how dire the stakes are, and what kind of threat is looming for the land of Tamriel.

Those diving into the Prologue, or even those with a passing interest in the expansion, will want to view the full trailer down below.

The Elder Scrolls Online: Greymoor is slated for release on PC on May 18, with a release on PlayStation 4 and Xbox One slated for June 2. For more on the game, check out our coverage of the DLC expansion pack’s reveal from earlier this year, where the game’s developers also hinted at what’s to come afterward via the Dark Heart of Skyrim content roadmap.