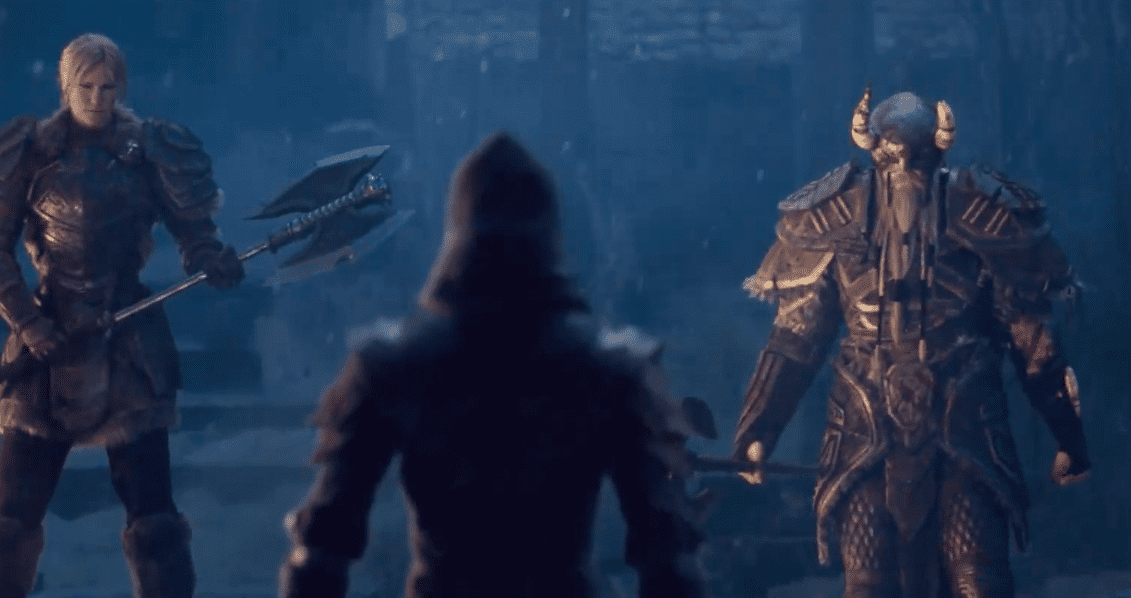 Bethesda has officially revealed the next expansion for The Elder Scrolls Online: The Dark Heart of Skyrim, or Greymoor, a dark and gothic adventure which will see players return to the Nordic homeland.

During a global reveal event held on Jan. 16, the company unveiled the expansion in earnest with a new cinematic trailer teasing the expansion’s plot line.

In it, a force of Nordic warriors are seen investigating an empty village, only to be ambushed by a dark and mysterious force. Though many fall, two survive and even corner their assailant: A vampiric rogue, steeped in dark power.

The vampire then escapes the warriors, returning to a gothic castle lair and kneeling before an unknown individual.

Fans can view the full Dark Heart of Skyrim reveal trailer for themselves down below.

Rich Lambert, creative director at Zenimax Studios, then went on to share more details covering what the expansion would entail.

In terms of story, the expansion takes a more gothic, monster-focused approach. Following the disappearance of people in remote villages, it is discovered that an abundance of vampires, werewolves and other dark creatures have begun to appear throughout the land.

It’ll be up to players to find the cause of these disturbances, and put an end to the one or ones responsible for trying to spread evil across the land.

The expansion will offer a new main quest line for players to experience, as well as a wealth of dungeons and new areas of Skyrim to explore. However, being that it will be a Skyrim 1,000 years in the past from the land Skyrim players explored in the core series, it will have plenty of surprises to uncover.

The expansion will also revamp Vampirism and how it’s handled within the world. In addition to a reworked skill line for vampirism, players can enjoy new animations while feeding on their prey. They’ll need to be careful when doing so though, as there are new ramifications in place if they’re seen feeding regularly both on a small and large scale.

Players will likewise be able to uncover Antiquities; remnants of days long-gone from Tamriel’s past, many of which will come from ages players have never been able to play through.

By uncovering clues and traveling across the new region, players can find these Antiquities and keep them for their own use as cosmetics, gear and house decorations.

Lambert wrapped up the reveal by announcing that Greymoor is set to roll out over the course of 2020 via four major updates. The first update, Harrow Storm, is set to release during Q1 2020, and player test servers go up next week. The second Greymoor update is slated for release in Q2, and would see more details unveiled closer to its release.

Details on the other two updates, meanwhile, would be revealed during Bethesda’s E3 2020 conference.

The Elder Scrolls Online is currently available on PlayStation 4, Xbox One and PC. For more on the game, check out our coverage of the news regarding the title coming to Stadia sometime this year.