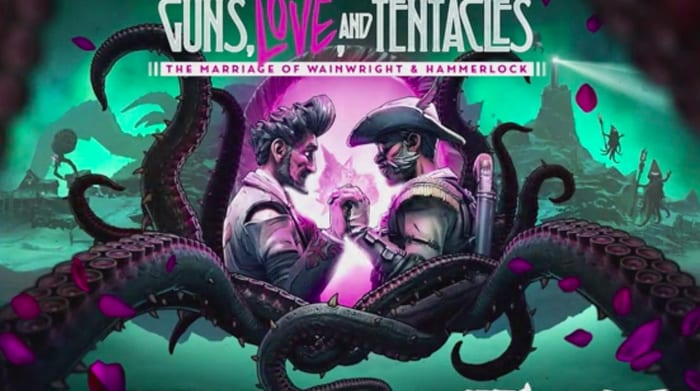 Gearbox Software has unveiled the next DLC expansion for Borderlands 3, and fans won’t have long to wait before they can get their hands on it.

During Gearbox’s Pax East 2020 press conference, the company’s president Randy Pitchford revealed that Borderlands 3’s next DLC Expansion pack to be Guns, Love and Tentacles: The Marriage of Wainwright and Hammerlock.

In it, the two titular characters finally attempt to come together in holy matrimony. Unfortunately, an otherworldly horror is unleashed on the same day as their wedding thanks to the vault hunter Gaige, forcing them to turn to the world’s other Vault Hunters for assistance in regaining control of the best day of their lives.

The company then revealed a trailer for the DLC. Along with the aforementioned characters making appearances, Cthulian horrors aplenty stand in the player’s way, dishing out bullets and tentacles alike for a wide array of chaotic shootouts.

The DLC is set to launch on all platforms on Mar. 26. The teaser trailer can be viewed in its entirety down below.

Pitchford likewise teased what the game’s next two DLC packs would include. While still early in development, Pitchford hinted at the fourth DLC being centered around Krieg, a former DLC Vault Hunter from Borderlands 2.

The third DLC pack, meanwhile, had some concept art available to view. In it, some characters can be seen engaging in a shootout befitting of a western.

Little else was revealed about the upcoming DLC packs, but more is expected to be released as they each draw closer to their full releases later this year.

Borderlands 3 is currently available on PlayStation 4, Xbox One and PC. For more on the game, check out our review of the title from when it first launched.

Likewise, stay tuned to Twinfinite.net for all of the latest news and announcements coming out of Pax East 2020 as it becomes available.