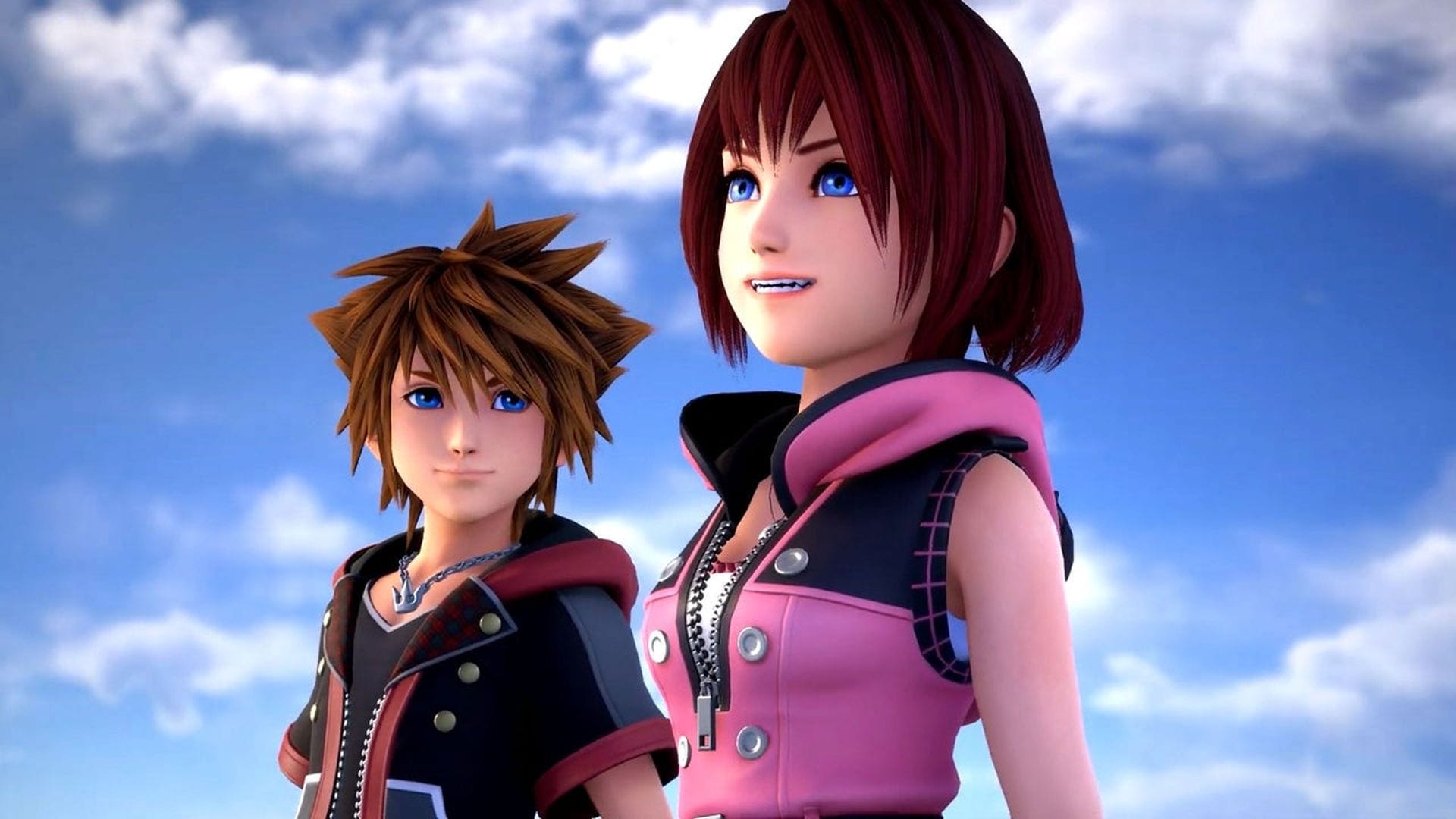 To say Kingdom Hearts 3’s ReMind DLC has a lot of story revelations and teases to unpack would be an understatement, and you wouldn’t be alone if you needed help getting them all straight. That’s why we’re here to explain the Kingdom Hearts 3 ReMind story and ending with a detailed guide.

To start, let’s summarize everything that happened in Kingdom Hearts 3’s ReMind DLC.

The DLC starts with a few conversations between the Thirteen Darknesses and other main characters.

Xigbar and Luxord hint at who they really are and how much they actually know about the wider plot; Xehanort, Saïx, and Xigbar discuss who will be included in the Thirteen Darknesses and why; and a Young Xehanort speaks with the Master of Masters, who is revealed to be the catalyst for his plot to steep the world in Darkness as a means to control it.

The last conversation is the most important, as it reveals the Master of Masters may have been trying to bring the world to ruin. Likewise, it’s revealed that he told his name to Xehanort, though players aren’t given the chance to hear it themselves just yet.

What Happens During the First Playable Portion of ReMind

After that, Kingdom Hearts 3’s ReMind DLC moves into its first playable portion.

Set shortly after the end of the base game, the DLC shows Sora return to the Final World to find a way to restore Kairi’s heart. There, he meets Chirithy and learns that he can do so by going back in time again to the point where he prevented everyone’s deaths at the entrance to the Keyblade Graveyard, and by then using the Power of Awakening to enter his friends’ hearts at times before Kairi was killed.

He’ll then have to reconstruct her heart right at the moment it was destroyed, and guide her back to the present.

Undeterred, Sora goes back in time to the timeline where he and his friends were defeated, and starts trying to move through each of his friends’ hearts toward Kairi.

As he does, the Dark Inferno tries to stop him, but he successfully defeats it. He then tries to enter Ven’s heart, but is quickly knocked out of it when Ven is defeated by the Xehanort-controlled Terra.

Afterward, he enters Aqua’s heart and learns that Aqua broke down in front of the mass of darkness in the original timeline because she had a flashback to her time in the Realm of Darkness.

He battles her dark half once again, and then travels through the rift in time created by his original time travel. Once in the new timeline, he learns Naminé had been on her way with Terra’s Lingering Will all along, and that was why it showed up to save them in the timeline where Sora saved everyone.

He then dives into Terra’s heart via the Lingering Will, and battles the Xehanort-controlled Terra alongside it. Unfortunately, the Lingering Will sacrifices itself to save Sora from a fatal blow, and then Sora is dragged down into the darkness for a time.

From there, players are guided through new versions of the labyrinth fights from the base game. They can play as Riku, Roxas or Aqua in place of Sora, and likewise get some new cutscenes and moments as each fight occurs.

The first is a brief cutscene after Riku and past-Sora defeat Replica Riku and Xigbar. It’s revealed Demyx appeared to take the replica body for safe-keeping, either to use for Naminé later or as Roxas’ new body later on.

The next new scenes occur before and after Aqua, Ven and Sora’s battle with the Xehanort-controlled Terra and Vanitas. Before the fight, Aqua and Ven re-affirm their desire to save Terra. After the fight, it’s revealed the time-traveling Sora was stuck in Terra’s heart after his defeat, and is freed once Terra regains control of his Shadow form.

He then uses the power of awakening to help Terra regain control of his body, and continues to move through his friends’ hearts.

Next, he enters past-Sora’s heart briefly to fight alongside Axel and Kairi against Saïx and Xion. After reaching a certain point in the battle, he is able to awaken and enter Xion’s heart with the help of Roxas’ heart trapped in past-Sora, allowing him and Xion to save Axel from Xemnas after he appears to finish off Past-Sora, Axel and Kairi.

He then uses the Power of Awakening again to free Roxas’ heart, just in time for the arrival of a replica body, and moves into Roxas’ heart once it enters the replica.

After this point, the timeline starts to change again. Sora and Kairi are captured by Xemnas, and Roxas, Axel and Xion must team up to defeat him and save their allies. They do so, and also regain the X sigils Xemnas originally gave them to prove their membership in Organization XIII.

However, Xemnas still captures Kairi and escapes, forcing Sora to continue traveling through his allies’ hearts toward her and Xehanort.

Upon reaching Xehanort, Kairi is destroyed, but in the brief moments after it happens, Sora is able to use the Power of Awakening to travel through Xehanort’s portal to Scala ad Caelum.

From there, he sees a trace of Kairi make its way further into the city. He follows, and begins to track down pieces of Kairi’s shattered heart.

He gathers five before Past-Sora arrives, and learns from Xehanort – who is aware of his presence due to his own time-traveling shenanigans – that there are seven heart fragments in total, with one hidden in the heart of each of his allies.

He was able to gather the five he has because he traveled through five hearts up to that point, and needs to get the last two from his remaining allies, Riku and Mickey. However, if he can’t do it before Past-Sora defeats Xehanort, the fragments will disappear and Kairi will be lost.

To that end, Sora travels back through Xehanort’s portal and enters Riku’s heart, aiding him and his friends in pushing back Xehanort’s clones that attacked them while his past self was fighting the real Xehanort at the end of Kingdom Hearts 3 proper.

They nearly succeed, and Sora claims another fragment of Kairi’s heart, but then the clones overwhelm them. They are then sent flying out to seperate worlds via Keyholes opened by the clones, save for Mickey.

This leaves Mickey to fight off the clones alone. Thankfully, with Sora’s help via the Power of Awakening, he defeats them and links the Keyholes together, allowing Sora’s allies to find each other and granting Sora the last fragment of Kairi’s heart he needs.

Sora then reunites all of the fragments and brings Kairi back from the dead, and the two defeat a remnant of Xehanort at the same time that Past-Sora defeats the real Xehanort.

With Kairi’s heart restored, Sora returns with her to the Final World. He notices that his body is starting to disappear, but keeps it to himself. The two then convince Chirithy to join them in returning to the realm of light so that they can be reunited with Ven, who is an old friend of theirs.

From there, ReMind has its last cinematic: A revamped version of Kingdom Hearts 3’s final cutscene, complete with scenes showing that Sora and Kairi were helping to make sure all of their friends had happy endings following their return.

They can be seen pushing Chirithy toward Ven after Ven, Terra and Aqua visit Eraqus’ grave at the Land of Departure; watching over Roxas, Axel and Xion’s hang-out with Hayner, Pence and Olette in Twilight Town; and using the Power of Awakening to free Naminé’s heart from Kairi so she can receive a body of her own.

They then return to Destiny Island, and Sora appears to reveal to Kairi that he’s disappearing because of his time traveling. He then disappears, and the main episode of ReMind ends.

What Happens During the Limicut Episode

From there, the second part of Kingdom Hearts 3’s ReMind DLC – titled the Limicut Episode – begins.

Following Sora’s disappearance, all of his friends set out to find him. Aqua, Ven and Terra go to the Realm of Darkness together, now protected by each other and their Keyblade Wielder armor.

At the same time, Mickey, Donald and Goofy search every past world they’ve ever visited, while the group in Twilight Town analyze Roxas and Xion’s memories for any sign of Sora’s whereabouts.

Kairi, meanwhile, goes into a coma, presumably to find Sora within the Dream realm; or, because her heart was linked to and saved by Sora, as a means of keeping her body from disappearing again.

A year passes, and with no luck, Riku visits the group’s allies at Hollow Bastion. Once there, he learns from Leon, Yuffie, and Aerith that they haven’t found any trace of him either, but that Cid has reconstructed data versions of the Thirteen Darknesses in the hopes of uncovering info on where Sora might have gone.

Riku uses a data version of Sora to defeat them all, but finds that they don’t contain any information as to Sora’s whereabouts. However, just as they are about to give up hope, the Fairy Godmother appears and reveals that Yen Sid has sent for Riku.

It is Yen Sid’s belief that because Riku once dived into Sora’s heart through the Dream Realm, he may be linked to Sora through his dreams. Riku confirms this, revealing that he’s been having a dream wherein he is in a city he’s never seen before. He then makes his way to Yen Sid’s tower, now hopeful that they have a way to restore Sora’s heart.

The final part of Kingdom Hearts 3’s ReMind DLC is the Secret Episode.

In it, Sora encounters Yozora, who is introduced as a video game character in the base game.

However, Sora meets him in a new world: A city, eerily similar to the one Riku described from his dreams in the Limicut Episode. He reveals that he’s heard of Sora, and that they aren’t in the “Real World.” Likewise, he says he doesn’t look like his real self, and asks why Sora Looks like Sora.

Yozora then attacks Sora, saying he needs to save the real Sora without giving an explanation as to why. When he is defeated, he says his powers aren’t needed yet and scatters into pieces within the Final World. Yozora then awakens in a car – with someone calling him Commander – and gives the same line from the start of the first Kingdom Hearts.

“I’ve been having these strange thoughts lately. Like, is any of this for real, or not?”

It’s unclear whether this sets up Yozora as the main character of a new line of Kingdom Hearts games or as a key character in the next entry, but it does at least show he’ll play a crucial role in whatever is next for the franchise.

And that’s about as clear as we can summarize what happens in the story and ending of Kingdom Hearts 3’s ReMind DLC. Hopefully it made things at least a little clearer.

For more on the game, check out our guide on how to unlock the secret boss, as well as our coverage of the creative ways players have been using the new Data Greeting feature.