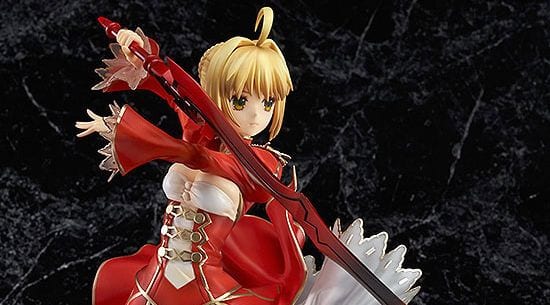 One of the most interesting aspects of the Japanese figure market is that it’s kind of timeless. Manufacturers aren’t afraid to go years or even an entire decade back in time to find characters to portray.

This is the case with the newest Nero Claudius Saber figure from the super-popular Fate series. She doesn’t come from the recent Grand Order or Extellla, she hails from an entire decade ago, and more precisely from the JRPG Fate/EXTRA for PSP.

To be fair, she’s a rerelease of a figure initially launched in 2015, but the point still stands.

The manufacturer is Good Smile Company, and she’s available for pre-order on AmiAmi for 13,100 yen, which approximately translates into $120.

The launch window is August 2020, which is indeed just over a decade after the Japanese launch of the game.

“Behold my glory… Hear the thunderous applause… Sit down and praise… My Golden Theater!”

From the popular game ‘Fate/EXTRA’ comes a rerelease of the 1/7th scale figure of the heroine, Saber Extra!

She has been sculpted taking the stance of her Noble Phantasm, ‘Aestus Domus Aurea: Golden Theater of the Deranged’, arranged carefully to convey her elegance and power through the figure. Her sexy crimson dress with large openings on the back, as well her semi-transparent petticoat have all been faithfully included on the figure.”