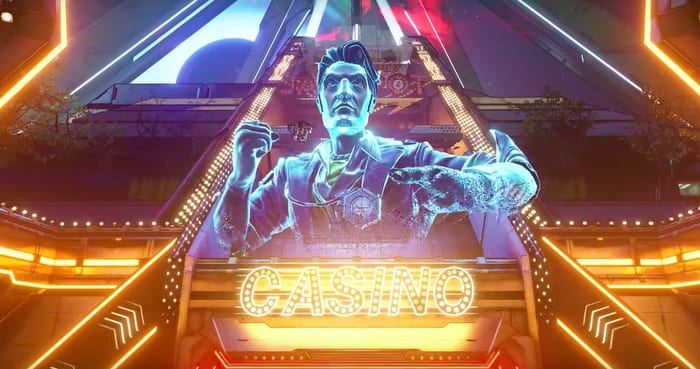 Borderlands 3’s first DLC pack has been unveiled, and it looks to be just as zany and full of action as fans could hope for.

In a post to Twitter and a post made to their official website on Nov. 20, Gearbox officially revealed Borderlands 3’s first DLC pack to be Moxxi’s Heist of the Handsome Jackpot, which sees players tasked with breaking into and looting a casino owned by the late, great series antagonist Handsome Jack.

“Join Moxxi’s crew of ragtag “experts” on a heist for the biggest score of your loot-hunting career!” the tweet reads. “Take on Hyperion security and crazed casino-goers in this new Borderlands 3 DLC, and claim The Handsome Jackpot’s vault of loot for yourself!”

Alongside Moxxi, Borderlands 3’s vault hunters can be seen breaking into the casino and heading toward its treasure vault to steal back the designs for Moxxi’s own casino, which were used to create the Handsome Jackpot in the first place.

There’s Hyperion security, mad patrons and imposing holograms of Handsome Jack galore, but with a bit of luck and a lot of bullets, players can come out on top and with a wealth of new loot in their possession.

It’s a fitting addition to the series, and the new locale bleeds with color and energy in a way fans of the series will love. Likewise, it’s good to see the return of the series’ infamous villain, even if it is only in the form of an area’s aesthetic and some holograms.

Don’t just take our word for it though. The full teaser trailer for Borderlands 3: Moxxi’s Hesit of the Handsome Jackpot can be viewed down below in all of its glory.

Borderlands 3’s DLC Moxxi’s Heist of the Handsome Jackpot is scheduled for release digitally on Dec. 19 on PlayStation 4, Xbox One and PC.

For more on Borderlands 3, check out 2K’s recent sales report that showed just how well the game has done commercially since its launch.