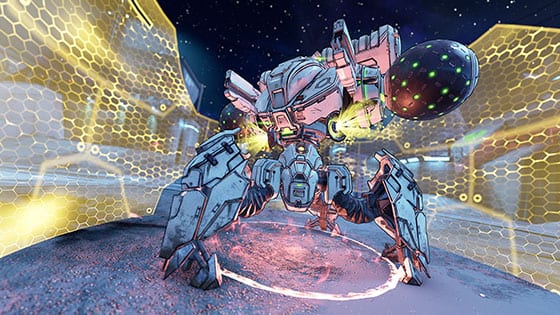 The Takedown at the Maliwan Blacksite mission for Borderlands 3 begins today for all active Vault Hunters whenever the patch goes live, and Gearbox have revealed a bit more about it in the notes for their latest patch.

To start the quest to obtain access to the Takedown at the Maliwan Blacksite mission you first must have beaten the main story. The quest can be found and accepted from Lorelei, the first character you met after the main quest took you to Promethea.

The patch notes make a direct warning that “this content is balanced for four players at level 50” and also give information what to expect from both this new Maliwan Takedown and further content down the line.

Takedowns feature special rules not found in the rest of the game! Respawning is disabled, so make sure you and your co-op partners get Second Wind or you’ll spectate until the team wipes. If you do die, you’re not out permanently! Die during the first half, you’ll get to rejoin your team if they defeat the Valkyrie Squad. If you’re out the second half, but your team manages to defeat Wotan The Invincible, you’ll get to respawn to enjoy the rewards you didn’t completely earn!

The patch notes also tell about the release of Mayhem 4, an even tougher level to Borderlands 3’s Mayhem system that sees enemies gain increased health and a buff to damage dealt with the reward being multipliers on money, eridium, and legendary drop chances.

This new Mayhem 4 has also brought with it a new set of Legendary items to the loot pool, and stronger items to match the brutal new mode.

The last massive gift given by the new patch is the much fan requested addition of more bank space that will assist with keeping these new legendary items.

All characters now begin the game with 20 bank slots instead of 10. The existing Bank SDUs will give everyone a total of 100 available spaces. An additional 10 Bank SDUs are available to purchase in Marcus’s shop on Sanctuary III using the in-game cash currency, each awarding 20 spaces, for a grand total of 300 total bank spaces!

You can find the full patch notes for Borderlands 3 here.

If you want to start the Maliwan Takedown but haven’t yet gotten yourself through the main story, Twinfinite has you covered with our Borderlands 3 guide wiki full of everything you will need to know to be the best vault hunter you can be.