Today Sony announced its financial results for the second quarter of the fiscal year 2019, which relates to the period between July 1 and September 30, 2019.

First of all, we get the numbers for the PS4 units shipped during the quarter: 2.8 million units were purchased by retailers worldwide, which means that the grand total as of September 30 is at 102.8 million units.

Below you can check out an overview of the performance of the Game & Network Services business (which includes PlayStation and PlayStation Network) below.

Both sales and operating income for the business have seen a significant decrease year-over-year due to a drop in both hardware and software sales, partly offset by growth of PlayStation Plus sales and cost reductions.

It’s worth mentioning, if you’re unfamiliar with this kind of data, that this doesn’t mean that PlayStation is losing money, but simply that it has made less money than in the same quarter last fiscal year.

We also get further details of the gaming business’ performance showing that the PlayStation Plus subscriber total is now at 36.9 million. 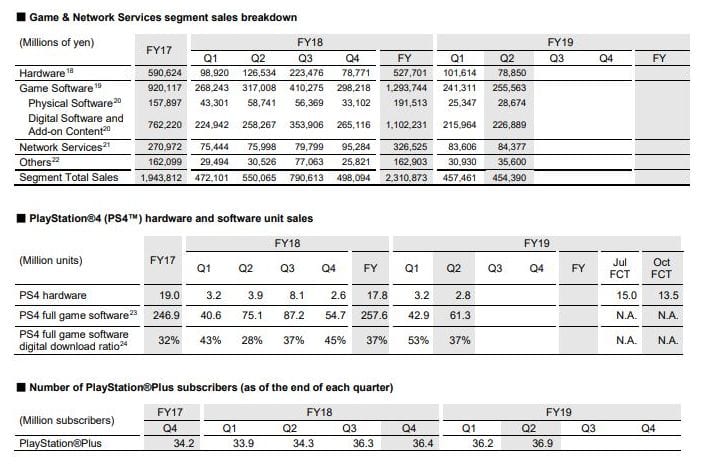 Interestingly, the forecast for PS4 units sold by the end of the fiscal year has been cut for the second time in a row (following the cut in made in July). Sony now expects to ship 13.5 million units in the whole fiscal year, which means reaching a grand total of 110.3 million units by March 31, 2020.

The press release includes an explanation for the lower forecast (which also involves revenue and operating income), including the delay of a first-party title, which is obviously The Last of Us Part II.

Operating income is expected to be significantly lower than the July forecast primarily due to the impact of the above-mentioned expected decrease in software sales and the negative impact of foreign exchange rates, partially offset by expected cost reductions and an increase in sales for PlayStation Plus.

Interestingly, the updated PS4 shipments total has passed both the original PlayStation and the Wii this quarter, leaving Sony’s latest console trailing behind only the PS2 in terms of total shipments for home consoles.

Speaking of Sony as a whole, all income numbers are firmly in the black, with a drop in sales year-over-year, while profit increased.

If you’d like to compare, you can read our dedicated article about the previous financial results announced in July.