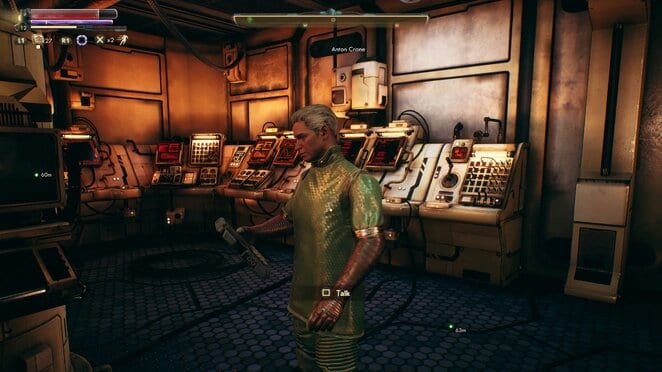 One of the more complicated side quests you’ll come across in The Outer Worlds is The Distress Signal, which sees you traveling to Roseway in order to make a few extra bits. While there are multiple objectives, the main one has you helping a scientist named Anton. So, here’s how to get Anton’s research and what to do with it in Outer Worlds.

As you follow the main quest to Groundbreaker, you’ll learn that Gladys needs 10,000 bits in order to give you what you want, hence why you head to Roseway.

Follow your marker and head to the main building to talk to Anton, where you’ll get a new quest called The Doom That Came to Roseway.

Your objective now is to head to the hidden research lab and get your hands on the research, luckily the lab is easy to find with your waypoint.

If you keep following the waypoint inside you’ll run into a marauder named Cassandra, who happens to be locked behind a door and also happens to have the research you need.

Now all the choice comes into play.

Getting the Lab Security Key Card

There are two different ways of getting the keycard to open the door for Cassandra. First, you can talk to Porter, the head of security at the lab’s entrance, and easily convince him you need a keycard to get around.

He’ll tell you about the terminal in his office that will print keycards, thus adding another waypoint. Follow it to the office and interact with the terminal to get the keycard.

The other way is by talking to Cassandra and convincing her to pull back her forces if the security forces pull out. If you have a high enough Persuasion skill, you can convince Porter that his life is worth more than dying in some lab.

If you’re able to do that, he’ll leave with his soldiers and give you his keycard in the process.

What to Do With Cassandra

Now you have to decide what you want to do with Cassandra. Let’s go over a few of the ways to deal with her.

Do note that if you save Cassandra you can start another quest called Journey Into Smoke. This quest is given to you at the alternate exit of the lab by one of Cassandra’s crew, named Lillian.

Who to Give Anton’s Research To

Now that you have the research, you have to decide what to do with it. Again, there are a few different options with various rewards, so let’s go over them.

Give Anton the Research – Giving Anton his research is your first option, and will net you 3750 Bits. At the same time, you’ll get the Dentastic trophy/achievement (this is the only way to get the trophy/achievement.)

Lie to Anton, Sell Research to Gladys – You can lie to Anton and say you didn’t get the research, which won’t net you any reward. However, you can turn around and sell it to Gladys on Groundbreaker, netting the same 3750 Bits. With 40 Lie and 25 Science, you can also convince her it’s rocket fuel, earning extra XP in the process.

Now you should hopefully have enough Bits to carry on and complete The Distress Signal.

That does it for how to get Anton’s research and what to do with it in Outer Worlds.

If you need any more help or walkthroughs, make sure to check out our Outer Worlds guide wiki. Here are a few other guides to look at.