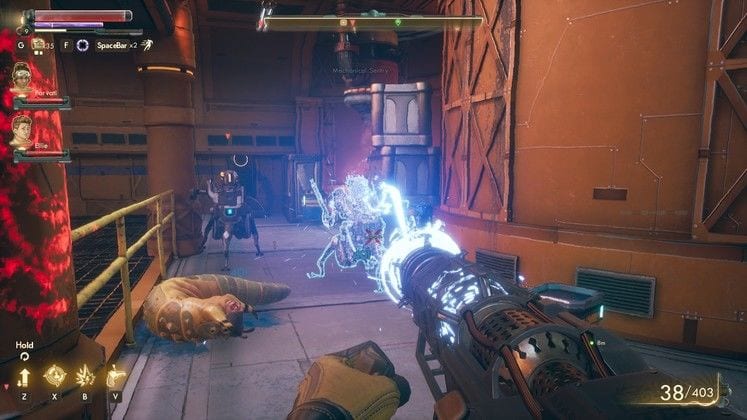 The Outer Worlds takes you on a trip around the Halcyon Colony, ruled by mega-corporations and The Board. You’ll be going up against plenty of marauder and alien creatures along the way, so you’ll need good weapons to defend yourself with. Luckily, we’re here to help you with the best weapons in Outer Worlds.

Before we get into things, it should be stated that The Outer World’s weapons system makes it so you can use pretty much anything you want. If you find a weapon you like, you can Tinker with it at a workbench to raise its damage in exchange for bits. In addition, you can equip mods on absolutely everything.

While you can upgrade anything to be pretty great, there are some weapons that start off better than others. Let’s get into them.

Assault Rifles are some of the most useful weapons in Outer Worlds as they have good range, good rate of fire and quick reload speed. Basically, you’ll want one in your inventory at all times.

The Assault Rifle Ultra is the best one you can get in the game, outside of unique weapons, and it’s pretty easy to get your hands on. The Ultra starts with a damage score around 620, and can easily be upgraded.

How to Get – Pick up off of enemies starting in Monarch, or purchase from a store.

Ultimatum is a nifty little pistol that comes automatically packed with plasma damage, and has a pretty decent damage score for whenever you get it as well.

Even better, however, is that the shots from Ultimatum can bounce off of most surfaces, making it a great option to just blast away.

How to Get – Talk to Shaw on Roseway and complete the Vulcan’s Hammer quest. Don’t take the schematics back to Gladys and instead let Shaw develop the weapon.

One of five science weapons in the game, the Prismatic Hammer is an incredibly useful melee weapon. The cool thing about it is that the weapon can cause every type of damage, switching between them with each hit.

This means that you alternate between shock, plasma, and caustic constantly, inflicting some crazy damage on enemies. You can also Tinker with the weapon to get it’s damage score higher, and investing in perks to raise your Science Weapon damage will help too.

How to Get – Head to Groundbreaker and buy the battered Mardet datapad from Gladys. Follow the marker to a hidden room on the west side of Groundbreaker.

This hugely modified plasma rifle fires off a three-round burst of N-Ray energy, making it a tremendously deadly weapon. It causes great damage, especially when upgraded, and can easily be made even better with some mods.

How to Get – The weapon is found near the end of the game in Phineas’ Lab, during the “Kept Secret But Not Forgotten” main quest.

There are a few different weapons with crowd control in Outer Worlds, but for our money, the Shock Cannon Ultra is the best of them. Although you have to be fairly close, this weapon shoots out a beam of electricity that causes constant damage to the enemy it hits, and it can even spread to other nearby enemies. This makes it perfect for close-knit groups of enemies.

How to Get – Luckily this isn’t one of the unique weapons of the game, so you can find it dropped by enemies about halfway through the game or purchase it from a shop later on in Byzantium.

Pistols are hugely useful in Outer Worlds, mostly due to the sheer speed they have both in fire rate and reloading. Irion’s Flintlock shoots two bullets at once, giving it a damage bonus over normal pistols. It also gets a huge bonus on weakspot damage, making it the perfect weapon to use with Tactical Time Dilation.

How to Get – Go to Groundbreaker and talk to Wanda Dorsett in the clinic to get the Solution Vital quest. Then head to Scylla and follow the marker to find Irion and save him, getting the pistol as a reward.

Supper Time is the only unique venom sword in Outer Worlds and it has two handy features. For one it causes caustic DPS, and two it can cause bleed status on enemies making it even deadlier. This is especially true if you have a melee build character.

How to Get – Talk to Velma in the factory in Stellar Bay to get The Secret People quest. Follow the marker to the, uh, interesting family’s house and then search the top locked room to find Supper Time there.

That does it for our guide on the best weapons in Outer Worlds.

If you need any other help or tips, make sure to check out our Outer Worlds guide wiki. Here are a few others to look at in the meantime.

What are the best weapons in The Outer Worlds?