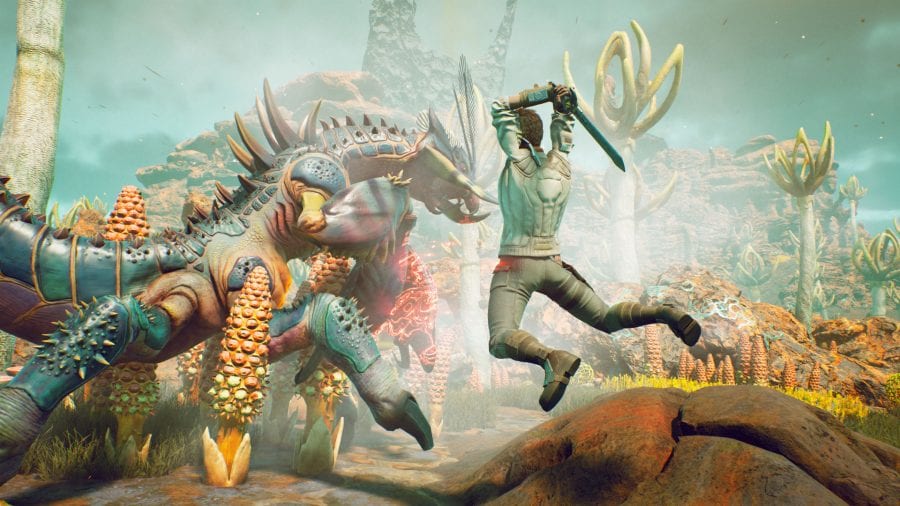 As you make your way through the various quests and explore the different planets in The Outer Worlds, you’ll constantly be improving and leveling up your character. There are various stats you can increase, but Outer Worlds’ Perks offer another way to finetune your character to suit your playstyle. Here are the best Perks in Outer Worlds that you should focus on getting first.

The Best Perks in Outer Worlds

Considering there are so many things to loot in The Outer Worlds, having a nice and high carry capacity will mean that you’re never going to have to leave that valuable weapon behind. Nor will you ever be stuck trying to get back to your ship overencumbered and moving at a snail’s pace.

A personal favorite perk of ours and one that’ll resonate with everyone who wants the action to keep on going no matter how close they are to death. The Harvest Perk in Outer Worlds restores 15% health whenever you kill an enemy.

When things get particularly chaotic, this can be the difference between dying and failing a mission, and bathing in the blood of your enemies as your health increases and you continue to dish out pain. Yes… yes we did get carried away a little bit there.

Depending on how you like to approach combat in The Outer Worlds, you may find Run and Gun to be a crucial perk to buy, or one you could leave.

If you’ve found your accuracy to be lacking a little bit, then Run and Gun should be top of your list of Outer Worlds’ best Perks to get.

Simple Perk is simple, but also incredibly effective and handy to have all the same. Toughness is that classic, staple Perk that you see in almost every game that offers them. You’ll get an additional 50% base health as soon as you equip it.

Does it do anything else? Nope. Who doesn’t want a massive chunk of additional health to help them tank hits in battle, though?

“You companions have a lot to teach you about killing.”

The description for Deadly Demonstrations reads. It’s true, your companions are a great boon to have in your arsenal in Outer Worlds, and they’ll also kill a bunch of things along the way, too.

Each and every time they get a kill, you’ll get a chunk of XP for simply having them join you for the ride. Deadly Demonstrations buffs that gift of XP by 50%.

Now, not only are your companions great assistants at dealing damage to enemies, but they’re also helping you to level up even faster in the process.

Plus, considering the companions are easily one of the best parts of Outer Worlds, you’ll always want to have one by your side. Do the right thing, get this perk as soon as possible to get the most out of it.

We mentioned before that there’s nothing worse than the snail’s pace that you’ll move when you’re encumbered in Outer Worlds, and while the Pack Mule perks we noted first on our Outer Worlds best Perks list are certainly going to make this less likely, it can still happen.

The Traveler Perk stops you from ever having to worry about this again, as you’ll be able to fast travel wherever you’ve got one of those blue icons on your map, even when encumbered.

That means you can speed back to your ship, drop off any items in the storage, and continue exploring at a normal pace again. Is it the most exciting Perk in Outer Worlds? No, but it’s definitely one that you’ll wish you had when you’re encumbered, miles away from your ship, and don’t have it.

Everything you use, be it weapons or armor in Outer Worlds has a durability bar. The more you use it or the longer you have it equipped for in the case of armor, the more it’ll degrade over time.

It’ll eventually reach a point where your gear just won’t be as effective as it once was, and it’ll need repairing. It’s something that can’t really be avoided, but you can make your weapons and armor last that little bit longer.

High Maintenance is a Tier 1 Perk in Outer Worlds that provides a 25% reduction in weapon and armor durability loss as long as it’s equipped.

Considering repairs cost weapon and armor parts, which are obtained by breaking down old gear or purchasing them, High Maintenance can save you cash and a lot of scavenging for these items.

Your Companions each have their own unique ability they can use in battle to help turn the tide in your favor. Once they’ve used it, though, they won’t be able to use it again for some time until the cooldown has reset.

Rolling Thunder is a Tier 2 Perk in Outer Worlds and provides a 20% reduction in Companion Ability Cooldowns for each kill you get. This is particularly handy for those long battles with plenty of enemies when you need that extra bit of firepower from your companions.

Finally, we have the Tit for Tat perk in Outer Worlds. If you’re running a melee build, or just always have a melee weapon equipped just in case, you may want to invest some Perk points in this one just to help keep that health bar looking… healthy?

Tit for Tat sees 15% of any melee damage you deal returned as Health, meaning if you’re having to slice and dice your way through a ton of enemies, your health bar should constantly be getting topped up with every swing of your sword.

If you’re more into using ranged weapons, though, this might not be the one for you.

There you have our picks for the best Perks in Outer Worlds. For more tips, tricks, and guides, be sure to check out our ever-expanding guide wiki, search for Twinfinite, or give more of our guides a read down below.