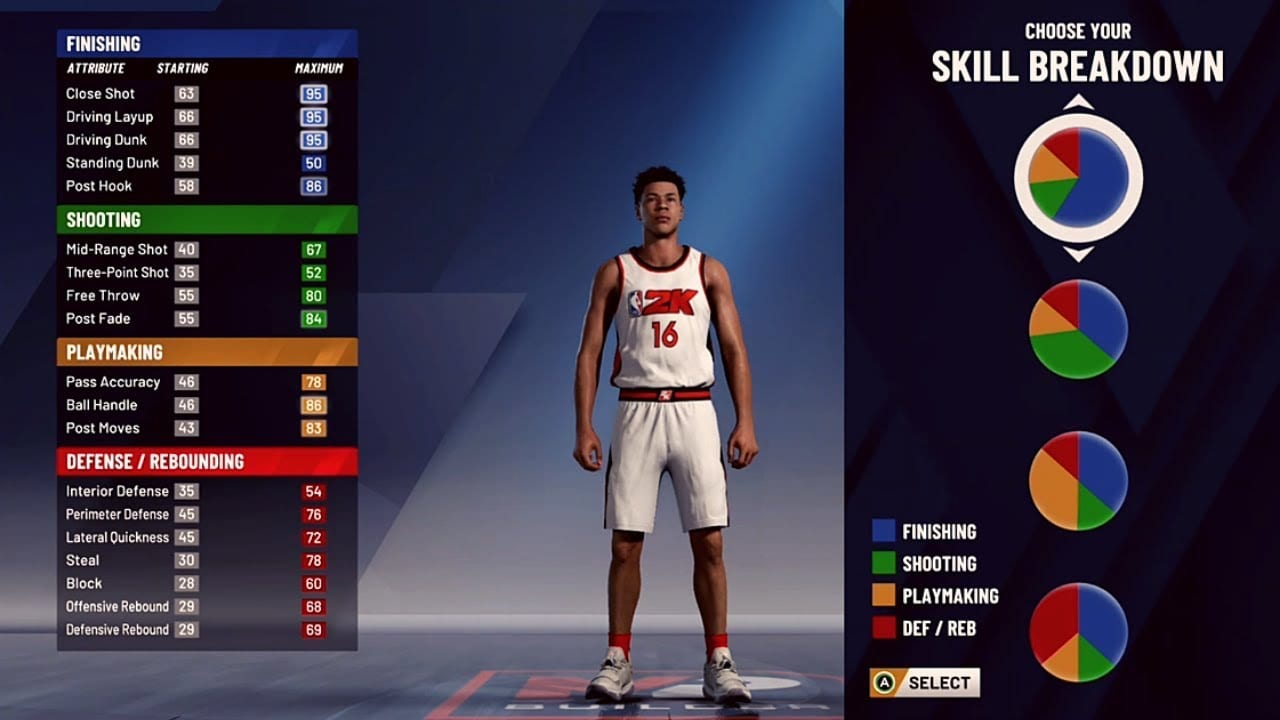 NBA 2K20 features plenty of variety in regards to its playstyle when customizing your player’s build for MyCareer. Regardless of what position you pick, there are a lot of different points of emphasis you can focus on for the position. Here is everything you need to know about the best builds for MyCareer in NBA 2K20.

For the Physical Profile, you’ll want the pink and purple chart in order to give your player good speed, agility and vertical.

The choices for Height, Weight, and Wingspan focus on speed and shooting, adding +4 to most attributes.

Last but not least, choosing Spot Up Shooter improves shots from deep, especially in catch and shoot situations.

When selecting a Shooting Guard build, you’ll be focusing on Finishing and Shooting.

Choose the pie chart that has an overall even flow for the Physical Profile.

Just about all the defaults are good in Height, Weight, and Wingspan, as they don’t take points away from any category and keep things consistent across the board.

Again, choose Spot Up Shooter to improve shots, especially when you catch and shoot.

Pick the even pie chart for Physical Profile, investing a third evenly into each area.

The measurements above add Finishing, Shooting, Playmaking, and improve Defense without sacrificing anything.

Personal preference for this builds Takeover is Slasher, which gives an extra boost to finishing at the rim in traffic and the ability to get past the defense.

The Power Forward Build is a mishmash of Finishing and Defense & Rebounding.

Choose the mostly blue and red Skill Breakdown and it will result in Max Finishing stats that range between 79-89, and Defense/Rebounding that is between 68-86.

Choose Strength and Verticality when given the choice in the Physical Profile. For your Power Forward’s Potential Attributes:

Lastly, you’ll want to select Post Scorer in order to become more dominant in the paint with stronger backdowns and enhanced moves and shots

For our big man, you’ll want to focus your Skill Breakdown on Defense and Rebounding. That means choosing the option that is mostly red for the Center.

Your Physical Profile Center allocation should be the pie chart that is even for all three categories.

Max out all Def/Reb in Potential attributes, as well as Standing Dunk, Post Hook, Close Shot, Post Move. Spend the rest between mid-range and ball handling.

Your Center is going to be tall and strong with the Height, Weight, and Wingspan provided above.

While this Takeover is down to personal preference, we went with Rim Protect, as this is a primarily defensive build.

That is everything you need to know about the best builds for MyCareer in NBA 2K20.

For more helpful tips, tricks, and guides to get things started, be sure to check out our official guide wiki. We have also included some other helpful guides down below.