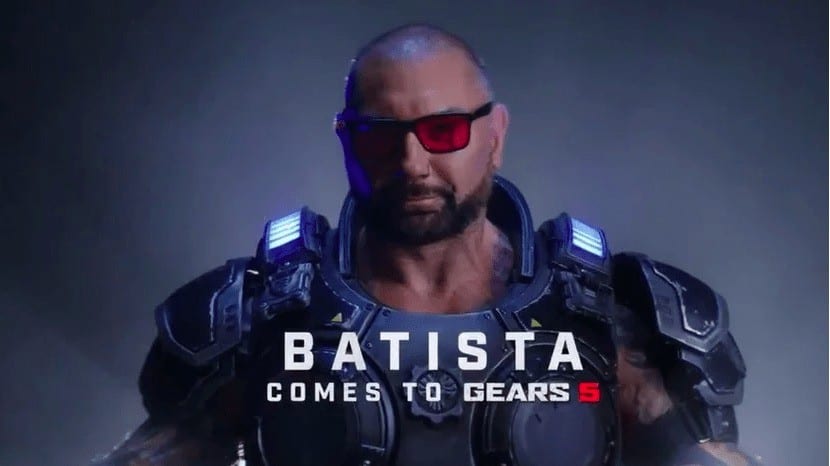 Former professional wrestler and current actor Dave Bautista has revealed that he’ll be a playable character in Gears 5, and sooner rather than later at that.

In a Tweet posted on Sept. 3, Bautista revealed that he would be available for play as a character in Gears 5.

Gears 5’s developer The Coalition later clarified with The Bleacher Report that he would be available for play via a multiplayer skin, across most all of the game’s different multiplayer modes like Versus, Escape and Horde Mode.

His character skin will be available for download and play starting on Sept. 15, following WWE’s Clash of Champions event scheduled for the same day.

It hasn’t yet been revealed what abilities he’ll bring to the table, nor whether his inclusion in the game will be a priced, long-term download or a timed event.

All the same, given his muscle-bound stature – and his long-held love of the series – chances are he’ll fit into the game about as well as fans could possibly hope.

The news also came with a live action teaser trailer showing Bautista in the game’s trademark COG armor. The video can be viewed via Bautista’s initial tweet below.

The news comes after several other character cameos announced in the months leading up to Gears 5’s release.

This includes characters from the “Terminator” movie franchise as well as Kat and Emile from Halo Reach; all of which are available as preorder bonuses for the various versions of the game.

Players will be able to see how all of them play soon enough, as Gears 5 is currently slated for release worldwide on Sept. 6 on Xbox One and PC.

In the mean time, there’s plenty of coverage of Gears 5 to dig into, including our detailed breakdown of what the game entails and what developer Coalition hopes to achieve with it via a PAX West panel headed by Coalition’s studio head Rod Fergusson.