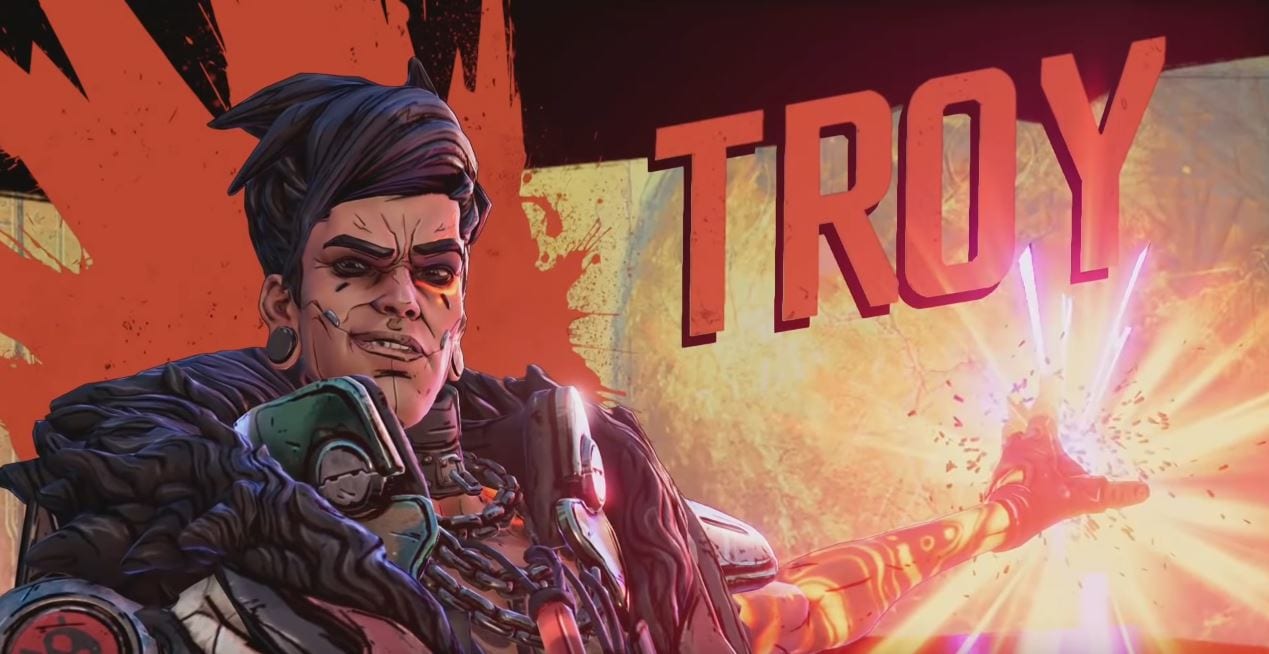 While he may not be the biggest bad in Borderlands 3, Troy Calypso is easily one of the hardest bosses you’ll come across in the game. That’s why we’re here to walk you through how to beat Troy in Borderlands 3 with minimal hassle.

How to Beat Troy in Borderlands 3

Acting as the first of Borderlands 3’s final few bosses, Troy is a mix of several other boss types you’ve taken on up to confronting him. He’s fast and agile like Katagawa, can unleash sweeping AOE attacks like Traunt, and can deplete your shields almost immediately like Aurelia.

He likewise spawns in a number of enemies to keep you distracted and widdle away at your health besides, making the fight that much more challenging when it comes down to the wire.

However, he isn’t without his weaknesses. Radiation damage works particularly well on him, and the Porcelain Pipe Bomb, in particular, can make quick work of his health bar whenever he’s vulnerable.

To that end, try to go into the fight with radiation weaponry and, if possible, the Porcelain Pipe Bomb grenade mod equipped. Radiation weapons are usually on sale from Marcus’ weapon shop, and the Porcelain Pipe Bomb can be obtained by completing the Raiders of the Lost Rock side mission. More on that side quest and where to find it can be found here.

How to Beat Troy’s First Phase

When the boss fight with Troy begins, Troy will have three key attacks he’ll use against you: An AOE blast of spaced-out energy balls, a homing sword swipe attack, and a ranged rocket pistol volley.

He’ll use the AOE attack more often than not, so you’ll want to stay at a range where you can see where they split and dodge or jump accordingly. The best way to do this is to stay outside of the square ring he’s standing in and circle around him, peppering him with gunfire all the while.

After firing off his AOE attack a few times, he’ll then launch into his homing sword swipe. Though fast, this can be dodged by jumping back and to the side as soon as he starts his wind-up. Don’t try to attack while doing this, and instead focus on not taking any damage.

As for his pistol volley, just run to the side and pepper him with bullets while also lobbing a Pipe Bomb or two. This should deplete his health before long and move you on to the next phase.

After losing the first quarter of his health, Troy will enter a period of invincibility before flying off-screen.

He’ll then spawn a charging energy bomb in the center of the area being fueled by beams from pillars. He’ll likewise call in enemies to attack you, though they’re easy enough to kill and only serve as a distraction.

Aim for the pillars and shoot them to deactivate the bomb, and Troy will return to the battlefield in a vulnerable state.

From there, he’ll start using a combo version of his AOE attack from earlier as well as a new downward strike with his sword covered in rocks. this is in addition to his jumping sword swipe, which he’ll still use intermittently as the fight goes on.

Fortunately, both his new attacks are easy enough to avoid by circling around the square ring. As an added bonus, he’ll also be stationary while using them, making him extremely vulnerable to attacks with the Pipe Bomb.

Circle around him to avoid his attacks and dodge between his AOE attacks as necessary, lobbing Pipe Bombs at him to sap his health quickly when he’s stationary. He’ll become invulnerable once more once he reaches half health, but you’ll just need to repeat the process with disabling the charged energy bomb from before.

Likewise, he’ll repeat the same attack patterns for his third phase, so just rinse and repeat until he’s down to a quarter health.

How to Beat Troy’s Final Phase

After reaching the final quarter of his health bar, Troy will add a new attack to his line-up: An arena-wide attack that sees giant rocks hurled at you from every direction.

Move to the back of the arena and dodge between the rocks as best you can. The attack will subside after a few seconds, so do your best to hold out until then.

From there, Tory will go back to his patterns from phases two and three. Wait for him to stay stationary and lob as many pipe bombs as you can at him. Before long, he’ll fall and you can add another notch to your belt.

So, in a nutshell, you can beat Troy in Borderlands 3 by doing the following:

That’s all there is to know about how to beat Troy in Borderlands 3. For more on the game, check out our guides on how to beat the Katagawa Ball and Killavolt, or take a look at our Borderlands 3 guide wiki.