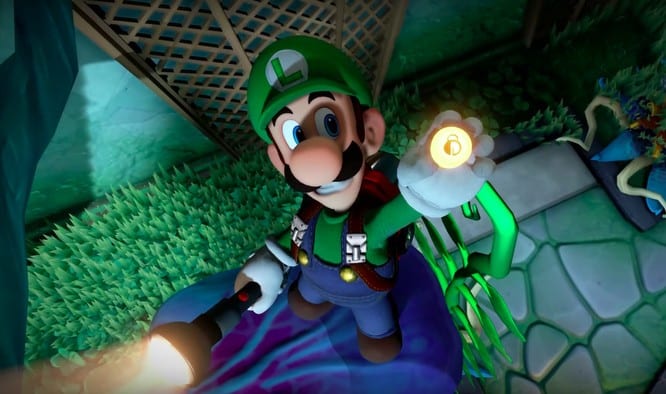 Luigi’s Mansion 3 was among the many titles Nintendo had on display at Gamescom 2019, and a newly released Nintendo Presents video shows some of the new elements attendees were privy to seeing.

Streamed via Nintendo’s official YouTube channel, the video shows off a guided demo of the Garden Suite, a new section of the Last Resort Hotel that hadn’t yet been shown to the public. Covered in plant life, it provides plenty of places for ghosts and other hazards to hide just out of sight, setting Luigi up for some scares.

Fortunately for him, he’s got plenty of new techniques to help him deal with these threats. In addition to all of the abilities afforded to him by the Poltergust in past games, he can also slam ghosts into the environment and one another to weaken them, making them that much easier to capture.

Players can likewise summon a Gooigi to help them in Luigi’s Mansion 3, taking control of the temporary doppelganger in single player to access blocked off areas and gather secret treasures. However, Gooigi won’t have as much health as Luigi himself, and can be easily destroyed by ghosts if players aren’t mindful.

Another player can likewise take control of Gooigi themselves for some co-op play, giving their friend a hand and hunting some ghosts side by side.

The demo concludes with a face-off against Dr. Potter, a special ghost who has dominion over the Garden Suite. Capable of controlling and manipulating plants, he can do more than impede Luigi’s progress through the level, and puts his abilities on full display in a quirky boss battle full of special mechanics and fauna-based hijinks.

The full video can be viewed down below, and fans of the series won’t want to miss some of the insights provided by those playing the game.

Luigi’s Mansion 3 is currently slated for release on Oct. 31 exclusively for the Nintendo Switch. For more on the game, check out our hands-on preview from E3 2019. (Spoiler: We left feeling pretty optimistic about it)