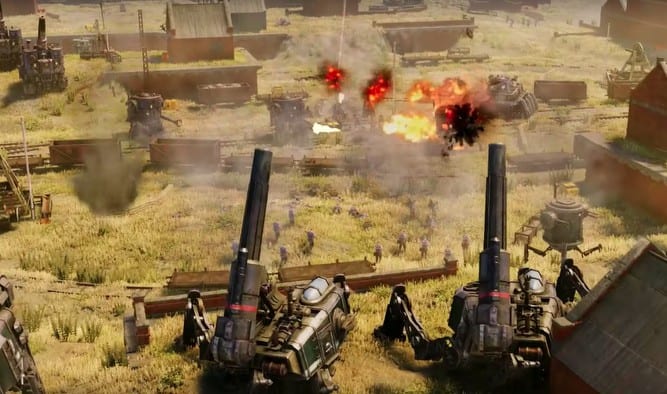 Fans of steam punk and tactical strategy titles rejoice: Iron Harvest has received a new trailer teasing the game’s story and lore, as well as a firm release date.

Shown during Gamescom 2019’s Opening Night Live event, the trailer opens with black and white footage of villages reminiscient of pre-World War I Europe. A narrator speaks of how the populace was lulled into a false sense of peace before war broke out, ravaging the land and locking the continent in a state of turmoil for five years.

As the footage goes on, however, it quickly becomes apparent that this was not the timeline we knew. Hulking, steam-powered monstrosities of weapons lumber across battlefields, tearing apart the landscape and their enemies in equal measure.

And yet, as the footage continues, the narrator’s tone changes when they reveal a new war is looming. They say that unlike with the first war, the populace is ready for the conflict in store for them, and they’ll have the help of their steam-punk weaponry to see this conflict end with less hardship and struggle.

The footage than moves into a reel of Iron Harvest in action. Regular foot soldiers and steam-powered machines fight side by side, clashing on wide-open battlefields and through ravaged towns alike.

It’s a strange sight to behold, and yet the sound work applied to the machines as well as that applied to the soldiers’ firearms does wonders for drawing the viewer into the experience.

It all culminates in the reveal that Iron Harvest is slated for release on Sept. 1, 2020 on PlayStation 4, Xbox One and PC.

Needless to say, it’s a lot to unpack, and fans of the title or genre will want to view the full trailer down below.

For more on all of the latest news out of Gamescom 2019, be sure to stay tuned to Twinfinite.net.