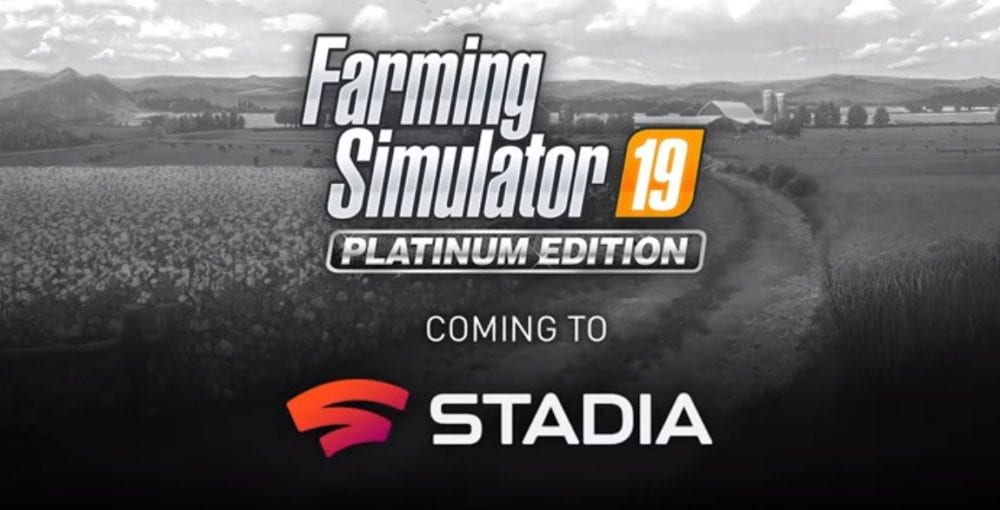 During Google Stadia’s Gamescom 2019 Presentation, it was announced that Farming Simulator 19 Platinum Edition will be coming to the streaming-based console when it launches in November of this year.

The Platinum Edition of Farming Simulator 19 comes with additional vehicles that the base game does not include, as well as CLAAS vehicles, one of the world’s most well-known farming brands.

With these additions, players will now be able to expand their range of activities to include things such as foraging, baling, and harvesting new crops.

These features add to the growing list already included in the 2019 version of Farming Simulator, such as horse farming and the ability to collect crops such as oats and cotton.

Farming Simulator 19 promises to bring the authenticity of farming to Google Stadia with its recreation of the various tools and vehicles that actual farmers use in their day to day operations.

Shown in the very long and exaggerated trailer below, players can see the various tractors and tools that will they will no doubt need to learn how to operate in order to complete the various objectives the game offers.

Although this is an expansion, the base game is quite robust in what it offers players already, allowing them to create a farm exactly how they imagine it, all under realistic conditions, using real equipment, and emulating the real struggle farmers go through.

The original game launched back in November 2018, keeping up with its annual release schedule that started with Farming Simulator 14. Prior to that, the games had released sporadically since 2008.

Farming Simulator 19 is currently available on Xbox One, PlayStation 4 and PC. The Platinum Expansion DLC will be released on October 22 for those platforms, but will be automatically included in the Stadia version when it launches in November.

Be sure to check out Farming Simulator 19 Platinum Edition when it comes to Stadia in the near future!