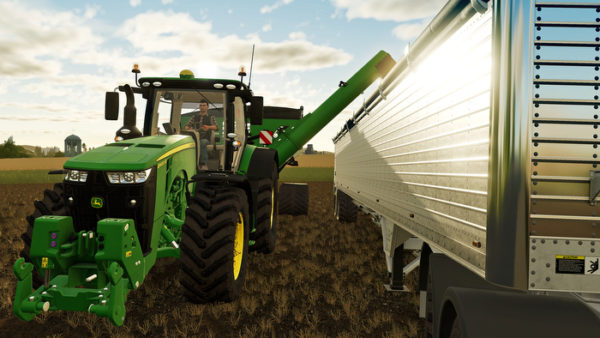 Farming sim games can be a strange animal, boasting gameplay that is ideal for longtime fans but often difficult for newcomers to find interest in. Farming Simulator 19 is one such title, offering a pleasant distraction for fans who want some more realism in their farming sim but leaving newcomers out to dry.

The premise of the game is simple. As the owner of a farm, you are tasked with the day to day upkeep needed for the farm to thrive and grow. This includes everything from tending the fields in their various stages of crop production and selling their yield for a profit to using said profits to buy new equipment.

Tasks can be covered by hired workers, but the player needs to assign new workers for each step of a field’s upkeep and ensure work continues uninterrupted. They can also choose which tasks to do themselves, staying active to maximize how much work they can get done on any given day.

The player only has so many hours to work before they get tired, and completing certain tasks sooner can yield better rewards from clients with a request for the player.

Though straightforward on paper, it’s easy to get lost in the repetition of these systems and the ways they overlap with one another. The player could be tending a field when another signals that it is ready for weed treatment, while the yield from another sits ready for baling and transport after a worker finishes their job.

Most times, this is far from a detractor. Like other games in the series, and other titles that fit into the same genre, this lends to the meditative quality of Farming Simulater 19 that fans will love. One task follows another, and by staying on top of them, players can get into a nice cycle of work, reward and growth.

The game’s presentation helps this as well. The lush, realistically rendered farmland, mixed with the light sound work of chirping birds or a fleeting gust of wind, build on the illusion that surrounds players as they carry out their tasks. It’s relaxing, and more than enough to keep the game peaceful and repayable.

Like other titles in the genre, though, this only takes the title so far. After so many hours of play, and with no real end goal, it comes down to the player when they want to stop playing. This provides plenty of replayability for some, but it also provides an experience that ends out of boredom instead of accomplishment.

Farming Simulator 19’s systems are also less than hospitable to newcomers. While it’s possible to pick up on the game’s many systems and how they interact as one plays, it’s easy for new players to overlook vital systems unless they play through the full tutorial before hand.

There are some hints given at the beginning of the game’s career mode, but these skim over small details that make gameplay worlds easier. This includes how to use counter balances for heavy equipment or the different ways to operate a log transport, or even where to find different equipment around the farm.

This is all to say nothing of Farming Simulator 19’s glitches, which range from a lack of polish to frustrating and game halting. For all of the well done graphics, there’s still some texturing and detailing that doesn’t load in, or looks rough around the edges even after it does.

Drop-off or vehicle refill zones can also be finicky in their detection zones, occasionally not detecting resources or the player at all. This usually doesn’t last more than a few seconds or minutes at worst, but occur consistently enough that they can still halt the flow of play and stagger a zen play experience abruptly.

Farming Simulator 19 is, for its intents and purposes, exactly what it needs to be. Its farming sim systems are well balanced and easy to use, and fans will have everything they need to zen out for hours of play.

By all other counts, it’s a rough entry point into the genre for newcomers and not the kind of game most people would enjoy as much as the more accessible titles seen in recent years.