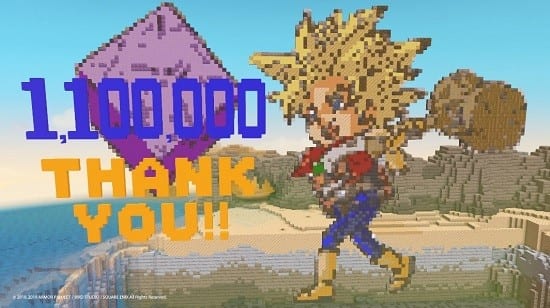 Developers Square Enix and Omega Force are celebrating a sales milestone for their Dragon Quest Builders sequel today, which smashed past 1.1 million units shipped and downloaded.

The game’s official social media account is promoting the achievement with a special thank you video to fans:

Thank you to all of our builders everywhere for helping #DragonQuest Builders 2 reach 1.1 million sales worldwide! Let’s keep on building bigger and better! #DQB2pic.twitter.com/R3k7ag4R3H

To further celebrate the game’s excellent performance, Square Enix also announced the launch of the game’s latest DLC, the “Modernist Pack,” which includes over 70 recipes.

“The pack includes recipes for modern-looking structures, hairstyles and clothing so players can build a luxury hotel, modern condominiums and more with the largest new set of recipes yet,” the press release reads.

Dragon Quest Builders 2 won critics and fans over in December last year with its blend of building and role-playing gameplay, which, while heavily inspired by Minecraft, manages to stand apart thanks to a charming, surprisingly deep story.

Twinfinite’s review had plenty of nice things to say about Dragon Quest Builders 2, concluding that it’s “a game that fans of the first game won’t be disappointed by and the perfect way for newcomers to get in on what looks to be a series on the rise.”