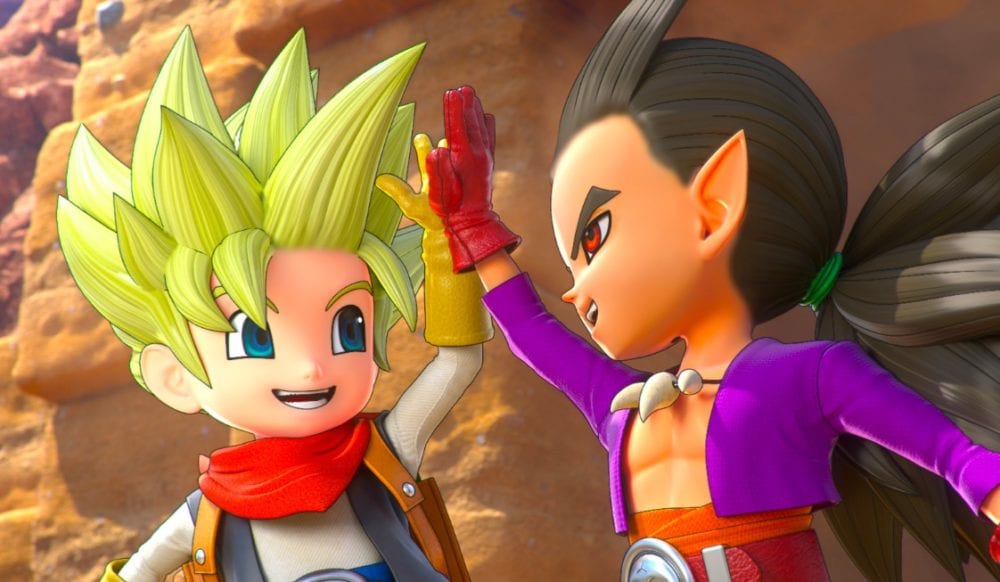 Dragon Quest Builders 2 is, for lack of a better term, is the epitome of a sequel, fleshing out mechanics and features which showed potential in its predecessor while making an amiable effort to improve in others.

Set after the events of the first entry in the series, the game sees players take the role of a new builder. Kidnapped and abandoned by remnants of the Children of Hargon, they’re left stranded on a deserted island alongside the amnesiac warrior Malroth.

It’s not long, though, before the two discover the island was once home to a legendary builder. Keen on restoring the island to its former glory and uncovering its secrets, the duo sets off to explore the surrounding islands for materials and fellow builders.

However, they soon find that the Children of Hargon have convinced the islands’ inhabitants that Builders are the root of evil and corruption, destroying any and all creations to “prevent the spread of their wicked ways.”

This leaves the two with only one course of action: They must rebuild each island from the ground up, proving that they seek to spread joy and prosperity, all while stopping the latest nefarious plan concocted by the forces of evil.

It’s nothing monumental in terms of storytelling, and feels a bit less epic than the first game’s plot, but fans of Dragon Quest will appreciate the bigger beats of the narrative.

Heroes encountering villains in disguise, side characters provide entertaining diversions, and the world itself is expanded into a wondrous and fantastical realm by the journey’s end.

It’s all presented in a way that doesn’t feel tacked on, and in many respects makes the game feel like a throwback to the classic Dragon Quest games of old.

Which is a big point in the game’s favor: Though it may look like a Minecraft clone at first glance, the application of elements and structuring from the Dragon Quest series feel natural and tailored to the experience.

It’s a good thing too, because there’s a lot of experience to be had from the game. Like in Minecraft, the fun comes from building onto and improving the world from the ground up, learning how to create and place objects as the game progresses.

However, thanks to the Dragon Quest-esque narrative thrown into the mix, the game takes on a slower, more drawn out pace.

Certain tools and materials are blocked off until players reach a certain point in the game, and attempting to create or destroy parts of the world without them will result in failure.

This can lead to hours of work spent on creating the first level of a massive structure, or even days spent digging out the path of a river and reforesting an arid landscape, only for a detour to be required to finish the job proper and see a project completed.

It can be frustrating at times, especially if players prefer to cut straight to the free-roaming, open-ended part of the gameplay loop.

At the same time though, it also makes every new creation or discovery feel earned and fought for, with a completed structure or rare item feeling like a long-sought-after treasure of old.

Likewise, this serves as a big incentive to play with friends via the game’s four-player Co-op.

Though it can be a bit weird when applied to the Dragon Quest framework, it soon becomes clear that the game was tailor-made for hijinks and cooperative efforts with friends.

This is doubly true when players finally gain full freedom to build and mold the world as they see fit, with areas once left off limits to them becoming open to hosting whatever creations cross their collective minds.

The same applies to the game’s combat and exploration. Though fairly shallow in terms of what players can expect from them, both mechanics offer their own incentives to keep playing.

New weapon recipes or combo attacks with allies can be learned with each level up. This, in turn, will make it easier to take on more dangerous enemies, opening up new areas for exploration along with the resources they hold.

It’s a pleasant enough gameplay loop, and though it can feel a bit repetitive near the game’s end, it stays entertaining enough to help players clear their heads after too many hours of placing or destroying blocks.

Throw in the vintage orchestral melodies that accompany moments big and small throughout the game, and the end result is an experience fans of Minecraft, Dragon Quest or both could readily enjoy.

Though there are still areas where it could stand to improve, Dragon Quest Builders 2 is exactly what it needs to be: A solid experience that builds upon what came before it.

It’s a game that fans of the first game won’t be disappointed by, and the perfect way for newcomers to get in on what looks to be a series on the rise.