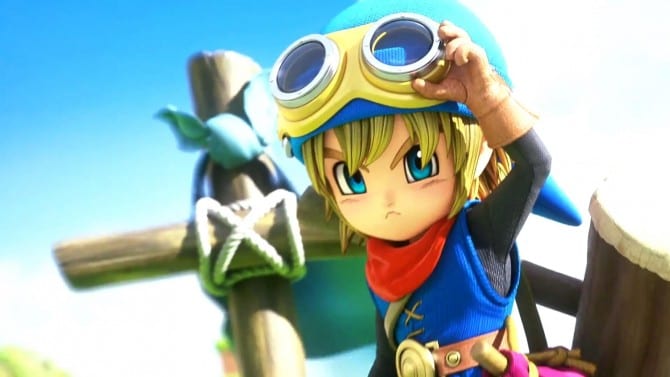 Dragon Quest Builders comes in swinging its sledgehammer to try out an iconic gaming series with some new age survival and building aspects. This refreshing detour from the typical JRPG that the DQ moniker is known for covers all the right ingredients that make up for a good game. While it’s easy to call it an attempt at cashing in on Minecraft’s success, the reality is that this is a whole lot of fun for any fans of survival builders in its own right.

In Dragon Quest Builders, you play either a girl or a boy that has been bestowed with special powers that allow you to shape the world around them. No one in this land has heard of the word “build” or the concept behind making one thing out of other things, and because of that, you’re basically a god to them. What follows is your journey to uncover who you are and why you’re there, all the while meeting villagers and rebuilding a castle back up to its former glory, prior to a devastating attack.

Monsters from the Dragon Quest series litter the world that you can explore and gather materials from and while the combat can get frustrating, it adds a sense of urgency during your explorations. The frustration comes in not really knowing how far you should stand from your enemy to hit them, and how close you can get until you’re damaged from touching them. But ultimately this is a small issue, and one that’s easy to ignore as you can overpower those suckers by crafting yourself better and better equipment.

The game, by the way, can best be described as Minecraft mixed with Animal Crossing. You’re going to meet more and more villagers that will join your growing castle and will ask you for plenty of different things. These serve as the quests within the game, giving direction and allowing you to learn more recipes as you open up new areas to explore. This can be considered a strength of the game, as otherwise it would be just an endless creative endeavor for players. However, with a leveling system (that increases as you craft more stuff), combat, quests, and the crafting of the world around you, it’s clearly more of an RPG hybrid. And it’s all the better for that.

The quests that people ask you to do, however, can get a bit dull and repetitive over time. When they’re fetch quests, that is. Other times, they’re a respite as a villager might ask you to defend the base or build something, exactly as their blueprint tells you to. This feature is nice for players like me who don’t have the creative capabilities to make a watch tower or blacksmith shop look cool. It also provides plenty of freedom in how you design buildings, so you’re not trapped in just using the blueprints provided by your villagers.

It’s in the building aspects that your character will level up (which opens up more story, quests, recipes). Making rooms/buildings and adding more to them will increase their point value. This all works as experience points towards your level. For example, a simple bedroom (four walls, two blocks high and a bed, light source, and chest) might be 100 points, but then you add pots, tables, chairs, and decorations in general to make it worth even more points. You basically can expand upon and improve on any building in your base in this way, optimizing the amount of experience points you get. It’s an interesting concept and one that doesn’t get old quickly thanks to the game’s pacing. Dragon Quest Builders only allows you to build as much as you have the ingredients for. That is to say, you won’t know how to make glass until you pick up your first sand block. You need to go out there and explore to find new materials, and through this (as well as through quests), you’ll learn more recipes.

My one complaint about the building is the sometimes frustrating controls and camera. More often than not, you’ll find yourself placing a block where you didn’t mean to place it, and ceilings definitely need to be built high up, lest you end up with a camera angle mess. However, with how much the game packs into its value, its flaws can be easily overlooked for its fun experience.

Dragon Quest Builders gives players the freedom to do whatever they want, while making sure they don’t get bored of that freedom too quickly by restricting how they get materials and recipes. This smart concept, mixed with the villager management and RPG elements make this one of the freshest experiences in the series.