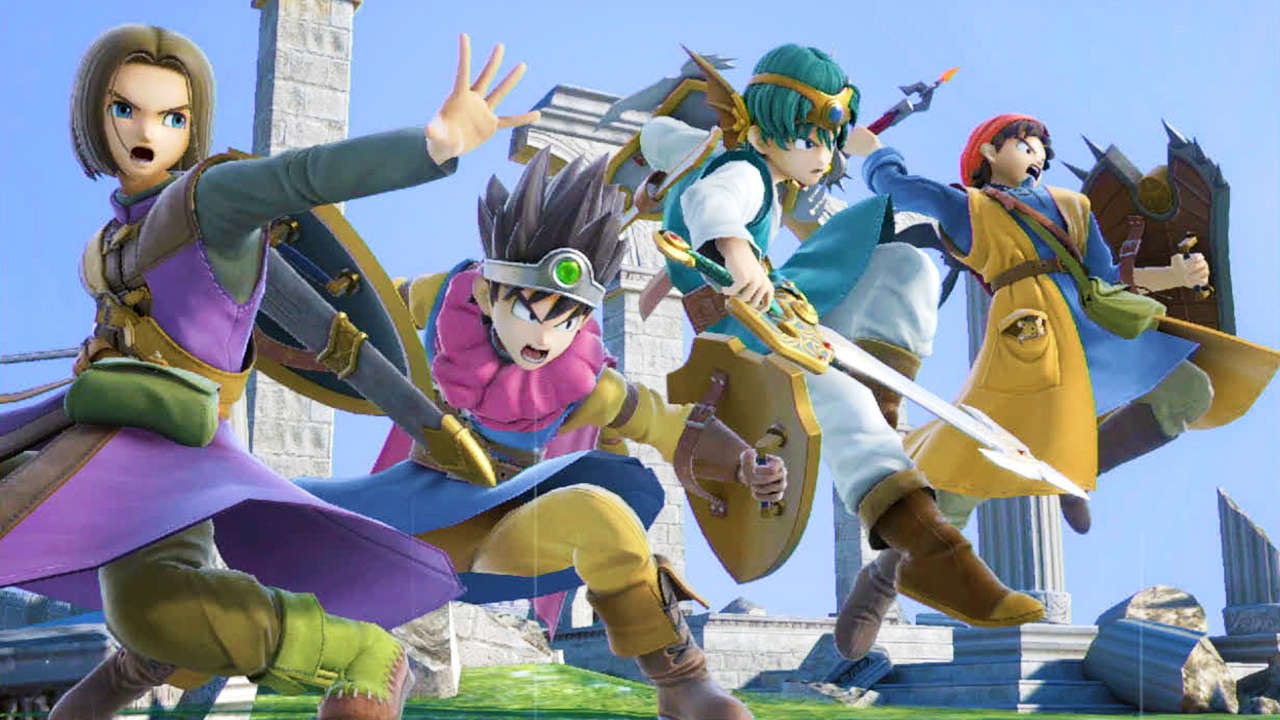 Of course, one of the character’s coolest features is that his alternate colors are actually heroes from past Dragon Quest games, but with a complex new character, you’re probably wanting a bit of help learning how to play him.

Hero is yet another sword fighter in Smash Bros Ultimate, but his special moves really separate him from the rest of the roster. All of his special moves are themed around an MP gauge, with each one taking a bit of that gauge away.

Before we get to special moves, however, let’s talk about Hero’s basic attacks. The Hero’s smash attacks have a 1/8 chance to cause a critical hit, again referencing the turn-based combat of the series. This means that you should be focusing on using smash attacks, as they can cause the maximum damage.

All of Hero’s basic attacks have a good amount of range behind them, so he’s a good character to play at medium range. Now let’s dive into special moves.

Neutral Special – Frizz/Frizzle/Kafrizzle – Charges up a long-range fireball that shoots straight ahead. There are three levels of charge and, like Samus’ energy ball, you can stop and start charging it. Damage is 9%, 18%, and 31% accordingly.

Up Special – Woosh/Swoosh/Kaswoosh – Creates a whirlwind underneath the hero that launches him upward, can be charged twice for greater effect. The whirlwind will also shoot away enemies that hit it.

Side Special – Zap/Zapple/Kazap – Shoots an electric bolt from the Hero’s sword, and can also be charged twice. The third charge, Kazap, has super armor and can’t be interrupted, having the hero hit enemies with a bolt and then swing his sword in both directions around him.

Down Special – Command Selection – Brings up a JRPG-style menu with commands to choose from. Each command has a different effect/attack, and there are a ton of options that will be selected from randomly. If you cancel out of the menu and use it again, the command list will reload with new options. Below you can find the whole list.

Like we said before, playing as the Hero is entirely focused on using special abilities. He’s a fine, if not exceptional character, in all of his other moves, but specials are what really make him unique.

Frizz and Zap are both super useful abilities that you can use to cause serious damage to enemies, and the fully charged versions have good launching power as well.

The Hero’s biggest strength, though, is the unpredictability of his down special. Because there are so many different moves to use, it can be hard for opponents to really predict what you’re going to use.

Of course, at the same time, it can be hard for yourself to predict what you want to use too, as the special menu is random each time you use it.

Still, it’s a good idea to get some practice in with Hero and learn how each and every special move works, so you can adapt on the fly and use whatever you might have access to.

Even with such powerful moves, it’s a good idea to pace yourself and not blow through the Hero’s MP in one go, as it will leave you at a severe disadvantage. MP does recover, but make sure to save at least a little bit so you can use Swoosh to recover when knocked off the stage.

Speaking of Swoosh, the move is also a great way to do some edge guarding. When an opponent is recovering, if you time the move right you can drop a whirlwind just before they’re able to grab the edge, catapulting them downward to certain death.

The Hero’s Final Smash is also super powerful and quite easy to grab more than one enemy in. He slashes in an arc upward to start the Final Smash, so just try to get close to multiple enemies before you launch into it.

As a final tip, the Hero’s shield can also deflect incoming projectiles, just like Link’s can, so try and keep that in mind while playing as well.

We also have a bunch of other how to play characters guides, like how to play Inkling, Incineroar, and Joker.