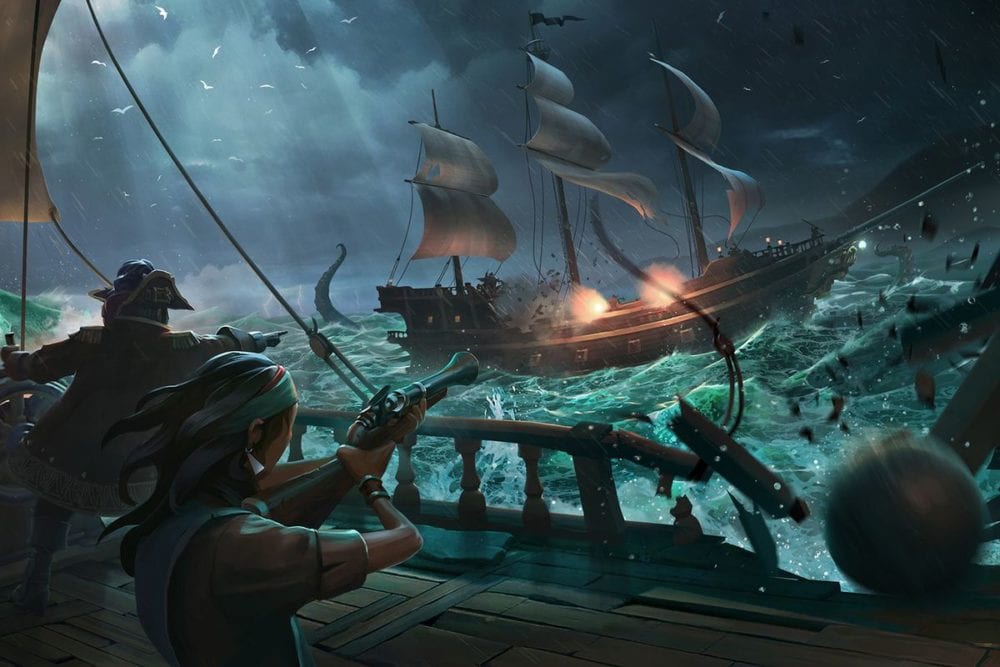 The latest developer update for Rare’s Sea of Thieves spends quite a bit of time discussing the upcoming plans for cosmetic microtransactions to be rolled out in-game.

First it’s worth mentioning that Joe Neate, executive producer of Sea of Thieves and the MC of this developer update, stressed that none of the purchasable items are going to give players a competitive advantage in-game.

This is not particularly surprising since nothing in the game outside of the most basic choices such as what ship and weapon to use, provide any advantages in combat.

The progression in Sea of Thieves from the start has been about enjoying the ride and not unlocking new things that make you stronger. Just about everything you unlock as you rank up is just there to show off to other players.

That said it does come off a bit odd in a game that pretty much only contains cosmetics, to carve out certain ones to sell to players. Neate touches on the reasoning briefly and is rather straightforward about it, that it is being done to carve out an additional revenue stream for the game.

Considering the game is now over a year old, it’s fair to assume that sales are probably not as strong as they were around launch, and it’s not shocking to see the developers look for another way to bring in revenue to continue development of free content for active players. In any event, I digress; let’s talk about the details.

As for what is to come. The first thing that will be rolled out are Pets. These will be tested one more time with players in Sea of Thieves’ insider program and if it works out well, it will be released to everyone else.

Following Pets, down the road Rare also has plans to add premium player emotes and ship cosmetics to Sea of Thieves that are along the lines of the Perfect Dark & Banjo-Kazooie themed items.

Outside of the digital business and microtransaction stuff, Neate also dove into plans to allow for PC and Xbox One players to opt-out or opt-into cross-play if they choose during time periods where it might be harder to matchmake with players in the same region/platform for Arena games. The plan is also to eventually roll this out to Adventure mode as well.

Rare is also testing new Sword and Guns to improvements to hit registration, and are also testing to see how Sloops and Brigs can be added into Sea of Thieves’ PvP Arena mode.

Neate discussed that the team experimented with just straight up adding them as an option alongside Galleons, but after some testing they felt that was not the right way to add them in and they are currently looking into other options.

If you’d like to see the full update straight from Rare’s Joe Neate yourself, you can do so below.