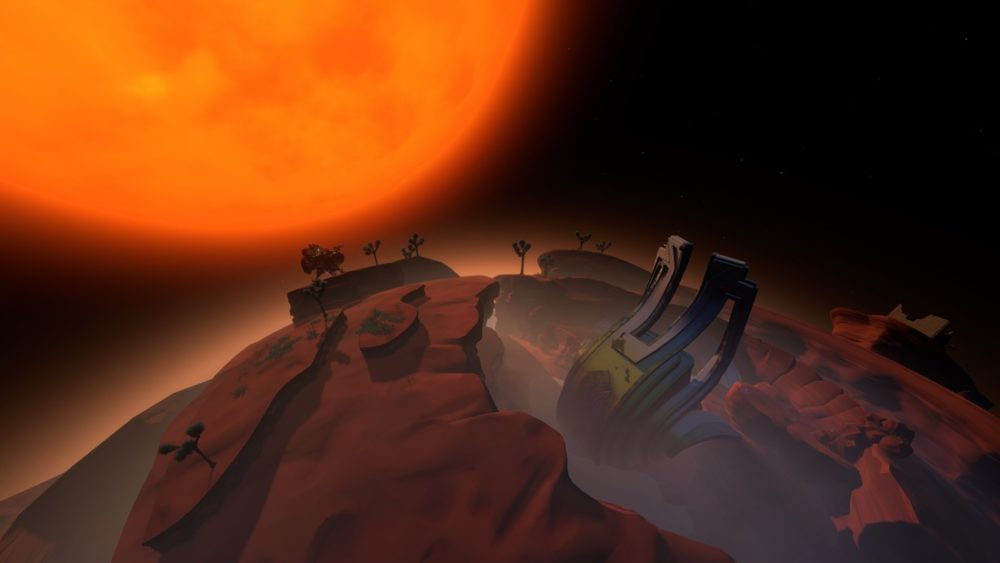 Getting Inside the High Energy Lab in Outer Wilds

If you thought that getting inside the High Energy Lab was going to be as simple as heading to its entrance on the south pole of Ember Twin and waltzing inside, we’ve got some bad news for you. It really isn’t that simple. Unfortunately, the door is broken and you’ll need to find another way inside.

Fortunately, there’s a means of getting inside, but you’ll need to venture underneath the planet’s surface itself in order to find the entrance via the Sunless City.

There’s a slight problem, though, in that the Ash Twin planet quickly begins pouring sand into the core of Ember Twin, and this blocks off a lot of Sunless City and the paths you’ll need to take, so you’ve got to be quick.

Thankfully, we were able to find a quick secret entrance on the surface of Ember Twin that’s fairly easy to find, and can also get you to the Sunless City quicker than any other way on the planet. So let’s run through that first.

Finding the Secret Entrance to Get Into the Sunless City Quickly

First, you’re going to want keep an eye out for the Gravity Cannon on the surface of Ember Twin. It’s the giant cylindrical/ cone-shaped/ futuristic-looking cannon protruding out of the planet’s surface. You can check it out in the screenshot below, because we’re aware our description is rather horrendous.

Now that you know what you’re looking out for, you want to keep an eye out for this part of the surface that has two rounded edges and a little gap in between.

This is where you’re going to find the secret entrance that’ll lead you quickly under the surface and into the Sunless City. Land your ship just by the rock right in the center of our vision on the planet’s surface in the screenshot above.

There are other ways to get to the Sunless City, but if you’re wanting to get to the High Energy Lab, you’ll need to be quick getting there, and this is the fastest route we found during our time playing through Outer Wilds.

You should now have a view something like this. What you want to do is drop down into that shadowy bit that we’ve circled in blue there. You’ll now find yourself in a room. Jetpack over the gap and open up the door, don’t take the path to the left because it’s covered in Ghost Matter and you’ll die.

Getting to High Energy Lab from Sunless City in Outer Wilds

You’ve got to be quick doing this as the sand will begin to fill these caves and rooms rather quickly. Next, descend right to the bottom of this main room of the Sunless City.

You’ll want to look for the door you can open on the very ground floor of this large room with the weird orb mechanism. Do this and follow the path as it weaves its way around.

Next, you’ll reach a gap with sand pouring in from above and some cacti just on the other side. Here, you actually want to wait for the sand to fill the gap and cover the cacti so you can safely make it across.

Don’t bother trying to jump, you’ll just get pushed down by the sand and into the pit… or not make the gap and straight into the catci which will pierce your suit and drain your oxygen.

Across the gap, you’ll have the choice of two paths, take the left one, and follow the blue glowing power line into the next room. Here, you’ll want to look for a levitation portal just above you. Make your way up here and voila, you’ll find yourself in the High Energy Lab on Ember Twin. Now, wasn’t that a fun little excursion!

That’s all you need to know to get to the High Energy Lab in Outer Wilds. For more tips, tricks, and guides, be sure to search for Twinfinite. We’ve also included some of our other guides for the game down below for your convenience.