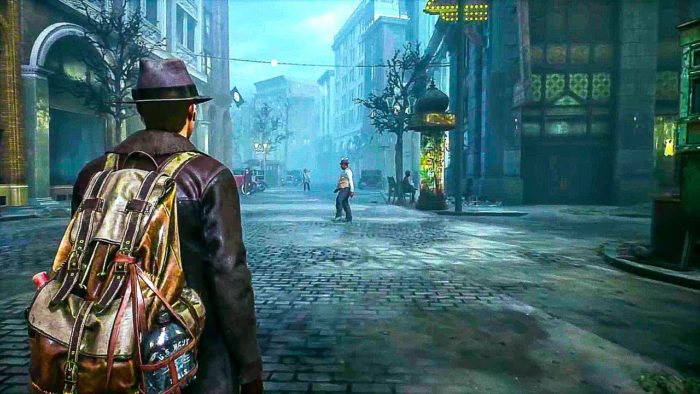 Today Frogwares released a new video showcasing some of the unique outfits that will be available in The Sinking City.

Those keeping up with the upcoming Lovecraftian investigation game may have noticed PI Charles Reed’s distinctive, bulging backpack that he lugs around with him in his travels through the ominous city of Oakmont. This is a more realistic take on what a detective would bring with him on a case, but some commenters have found it ungainly-looking and hoped there was an option to remove it.

Frogwares’ newest video(which you can watch below) addresses these concerns, showing Charles shoot some of the most common fashion-related questions like “can you toggle off that huge backpack?!!” and “can you change your outfit?”, before treating us to a look at six of the twelve suits that you’ll be able to wear in the game.

The Gangster, Plague Doctor and Vyshyvanka suits are unlockable in the game, while the sharp Daywear is only available as a pre-order bonus. The very sane-looking Cultist look comes with the Necronomicon edition. Charles may be losing his mind but he’ll at least have some snazzy threads as he wades through the supernatural flood afflicting the 1920’s city.

Inspired by H.P. Lovecraft’s universe of cosmic horror, The Sinking City pits newcomer Charles against the many weird inhabitants of the harbor town of Oakmont, as he investigates the supernatural flood that grips the city.

As shown in recent gameplay footage, Charles’ powers of investigation border on he supernatural themselves, and the more you use them the more you’ll have to fight to retain your sanity. You’ll spend much of your time in Oakmont solving criminal cases but the numerous trailers tell us there’s usually something more terrifying behind a seemingly ordinary crime.

The Sinking City releases on June 27 on PS4, Xbox One, and PC via the Epic Games Store. If you’re interested in snapping up the Daywear suit, the game is available to pre-order now.