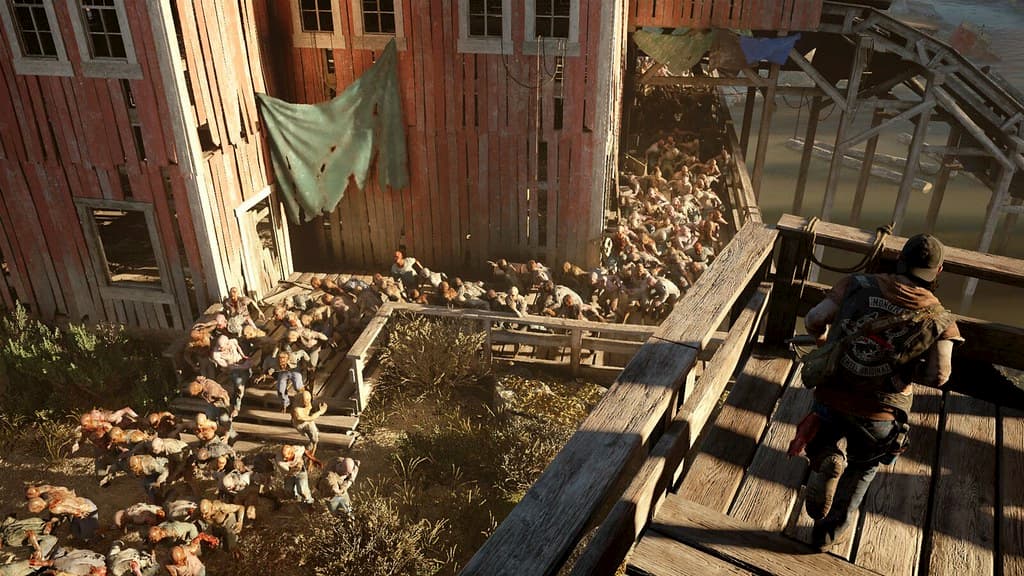 Hordes are easily the most impressive technical aspect of Days Gone, and possibly the most frightening as well. If you’re struggling with dealing with these massive groups of Freakers, we’re here to help. Here are a few tips for beating a Horde in Days Gone.

How to Beat a Horde in Days Gone

Before you jump into Horde-hunting, we highly recommend that you hold off on taking on these groups until you’ve reached the final act in the game, where Deacon travels to Crater Lake. As you progress through the story, you’ll eventually be tasked with taking down a Horde in a story mission.

This is the first mission that introduces you to napalm molotovs, which are essentially super molotovs that can take out a ton of Freakers at once. After completing this mission, you’ll be free to craft napalm molotovs whenever you want, and the materials aren’t too hard to obtain either.

Taking down a Horde in Days Gone isn’t impossible without the napalm molotovs, but it’ll certainly be a lot more time-consuming and will require you to burn more resources on pipe bombs, remote bombs, and ordinary molotovs, so we don’t recommend it.

Stocking Up on Explosives

As mentioned previously, you’re going to need a lot of explosives to take on the Hordes. Napalm molotovs are the main thing you want, but don’t skimp on pipe bombs and remote bombs either. The regular molotovs aren’t all that effective against Hordes, so just focus your resources on the other two.

Get a Lay of the Land

Before you even engage the Horde, make sure to survey your surroundings and look for loops where you can kite the group around. This is where you want to place all of your remote bombs.

Go around the perimeter and start putting down your remote bombs, and make sure you do so in order. The bombs will detonate in the order you placed them in, so it’s extremely important that you know the loop well, and know when to detonate them. It’s difficult to place remote bombs when the chase has already begun, so it’s best to do it now.

In addition to that, look for choke points for the Horde to funnel into. When the Freakers are forced into tiny, narrow spaces, you’ll have time to throw a pipe bomb or frag grenade into the group, dealing massive amounts of damage.

Make Use of the Environment

Most Horde resting grounds are packed full of explosive barrels and other traps you can make use of. For instance, the sawmill has planks of wood that you can cut down to crush the Freakers as they’re right on top of you.

Again, make a note of where these traps are placed so that you always have a path to run to during the chase. You’ll also want to note where the explosive barrels are located, and always used Focused Shot to blow it up, as Freakers can get into your line of sight very quickly.

Always Have an Escape Route

Your Horde hunts aren’t always going to go as planned in Days Gone, which is why it’s important to always have an escape route in mind. Just in case things go south.

Before starting the battle, park your bike somewhere easy to get to, and make sure it’s facing the direction you want to escape towards. If anything goes wrong, you’ll want to make sure that you can get to your bike easily and get some distance between you and the Horde to recover before re-engaging.

That’s all you need to know about how to take down Hordes in Days Gone. Be sure to check our Days Gone guide wiki for more tips and information on the game.