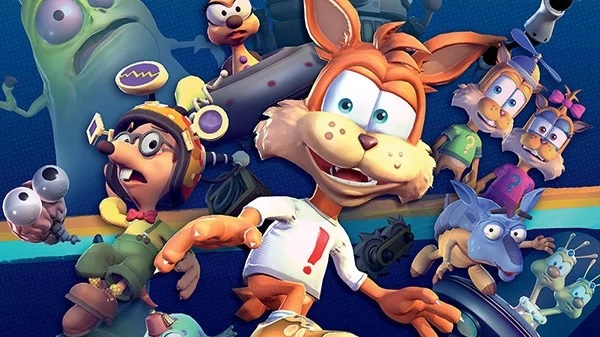 Out of all the 90s mascots who have survived into 2019, nobody expected Bubsy to be one of them, mostly because he seemingly died in 1996. But now he’s back in a new game. Again.

Bubsy: Paws on Fire, the latest in the maligned Bubsy franchise, was just released on the Xbox One, PlayStation 4, and PC. Unlike other Bubsy games, Paws on Fire is a rhythm runner in the same vein as Bit.Trip, which is no surprise since Choice Provisions developed both titles.

Not only does Bubsy: Paws on Fire change the standard Bubsy formula, it also digs deep into the Bubsy canon for playable characters. Players can run through levels as Bubsy, fly as an ex-antagonistic Woolie, and roll through sewers as Arnold the Armadillo. And, for the first time ever, gamers can control Virgil Reality, a character who only appeared in the failed Bubsy cartoon pilot.

However, the Bubsy hole goes even deeper. Paws on Fire apparently features over one-hundred levels, a combo system, and unlockable costumes and cosmetics. The Steam page even throws shade on microtransactions and proclaims “There are no in-game purchases!”

Given Bubsy’s pedestrian past and Bit.Trip’s prestigious pedigree, one might wonder where Paws of Fire lands. According to what few user reviews exist, the game is actually decent. Apparently, the three extra characters add some much-needed variety.

Admittedly, the release of a decent Bubsy game is cause for celebration, and the game’s publisher, Accolade, agrees. For a limited time, everyone who purchases Bubsy: Paws on Fire will also receive a free copy of Bubsy: Two-Fur. However, this deal only applies to Steam. Moreover, players can purchase the Paws on Fire soundtrack on all digital music storefronts.

Even though Bubsy: Paws on Fire is not currently available on the Nintendo Switch, a Switch version is schedule to release later this summer.