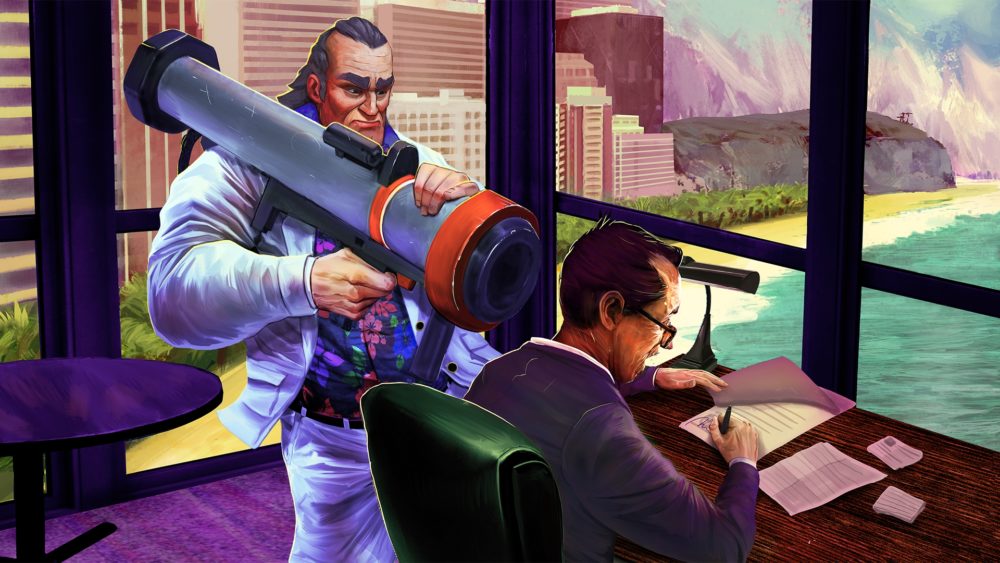 Today, Vblank Entertainment announced that their sequel to Retro City Rampage, Shakedown: Hawaii, will be playable in just two weeks.

Shakedown: Hawaii’s release has been long-awaited, expected to have been out sometime last year. It takes place 30 years after the events in Retro City Rampage and tosses players into an open, GTA-like world where you can interact with just about anything.

Shakedown: Hawaii will have players participate in missions to help build up their cooperation, ransack shops for money, and destroy the open world across farms, beaches, suburbs, parks, and more. It features vehicles like cars and boats, and there are more than 200 buildings that players can enter and explore. The game takes the look and feel of the original Grand Theft Auto, puts it on steroids, and wraps everything around a hilarious story involving CEOs and gang bosses.

Shakedown: Hawaii can already be pre-purchased on PC, via the Epic Games Store, and PlayStation Vita owners will be able to do the same starting at 10 am PST on May 3. PlayStation Vita preorders are for a physical edition of the game and limited to only 4,800 units.

If you’re a fan of 16-bit games, Grand Theft Auto, Hotline Miami, or Retro City Rampage, there’s a good chance that Shakedown: Hawaii is right up your alley. Check out the game’s overview trailer below.

Fans have been eagerly awaiting this title for years, and it’s almost here! Starting on May 7, you can play Shakedown: Hawaii on PC, Switch, PlayStation 4, and PlayStation Vita. A 3DS release will come at a later date.