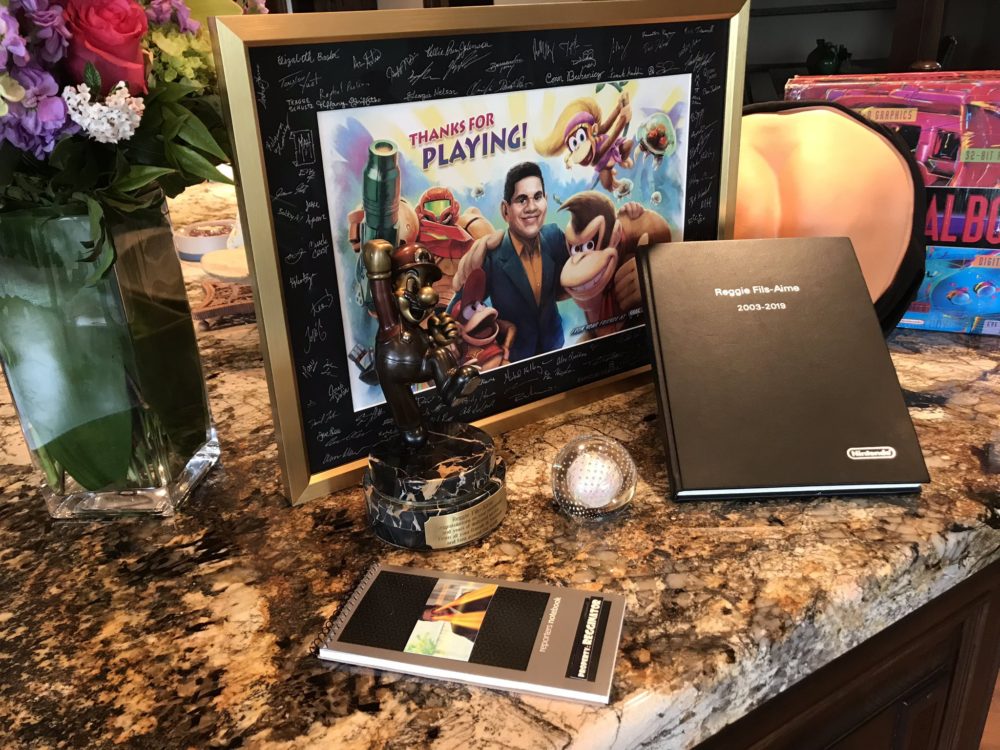 It’s been a few days since Reggie Fils-Aime’s official retirement as president of Nintendo of America. It’s been a sad couple of weeks since we first heard the dishearting news, but Reggie will always remain in our hearts, especially these memorable moments of him throughout his 13 years at Nintendo.

Since retiring, Reggie is still making waves and getting the spotlight as he finally has his own personal Twitter account that’s amassed quite the following thus far. He’s been making all of us cry by posting photos of himself saying goodbye to his office and to the Nintendo corporate office.

He’s also been receiving some pretty neat gifts from people to congratulate him on his retirement like this commissioned artwork from Sam Spratt, gifted to Reggie by video game personality, Geoff Keighley, showing Reggie in many of his alternate personas, like Muppet Reggie:

One of the best retirement gifts so far. From my good friend ⁦@geoffkeighley⁩ Commissioned from wonderful artist Sam Spratt. Thanks Geoff! pic.twitter.com/mNhvCndk4o

Also, one of the more interesting gifts comes from Metroid Prime and Donkey Kong Country Returns developer, Retro Studios. The artwork says “Thanks For Playing,” and features prominent characters from Retro Studios’ titles like Dixie Kong and Samus.

Last of my retirement events was last night. Received some wonderful gifts and souvenirs. Yes, that is a working Virtual Boy. Art from Retro Studios. Notebook for names taken. A plastic ass to kick. A book of notes from employees. And a Mario statue. End of an era. pic.twitter.com/mrOVL1ANPO

A group of Resetera users have noticed, in Reggie’s tweeted photo, that there is a mysterious character in the bottom-left corner of the framed picture, a robotic-looking figure that looks as if they were waving. Reggie seems to have coincidentally placed a figure of Mario right in front of the robotic body(?)

Retro Studios is currently leading development on the now-delayed Metroid Prime 4 after Nintendo found the ongoing development of the Switch title to not live up to Nintendo’s standards, the standard that was set by Retro Studios since they developed the first three MP games.

The metal hand in question is extremely intriguing as we have no idea what it could be from. Retro must’ve been working on a different project after the completed development of Donkey Kong: Tropical Freeze before jumping on Metroid, so this robot hand might be from an unannounced game or it could be from one of Retro’s canceled games – who knows?

This could be a tease for a new Retro game or just a playful easter egg for Reggie himself to appreciate and enjoy. Whatever it may be, I would love to know more…