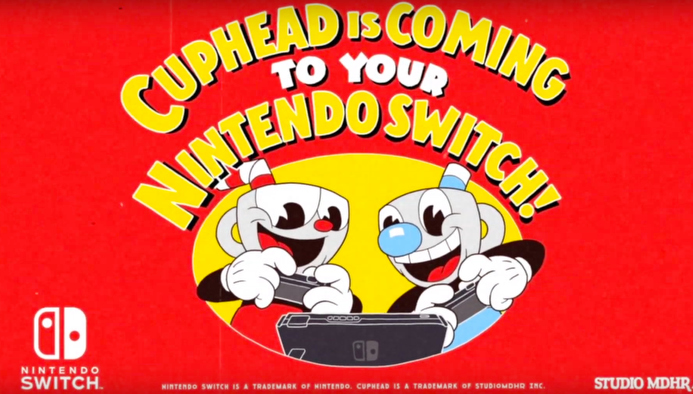 In honor of Cuphead’s release on the Switch today Nintendo has put out a brand new launch trailer for the game. The video features gameplay footage of the title being played on a Switch held by Cuphead himself.

This Switch version of the game was announced last month during Nintendo’s March Nindie presentation, and many fans were excited to learn they would be able to take this excellent platformer on the go.

For anyone unfamiliar with Cuphead, Nintendo’s official store page for the game provides the following description:

“Cuphead is a classic run and gun action game heavily focused on boss battles. Inspired by cartoons of the 1930s, the visuals and audio are painstakingly created with the same techniques of the era, i.e. traditional hand-drawn cel animation, watercolor backgrounds, and original jazz recordings.

Play as Cuphead or Mugman (in single player or local co-op) as you traverse strange worlds, acquire new weapons, learn powerful super moves, and discover hidden secrets while you try to pay your debt back to the devil!”

It is worth noting that the Switch version of the title will come with the game’s new content update that is also releasing today. This patch includes not only new features but also new art, animations, and back end game changes.

While the trailer itself is rather short, getting to see Cuphead play the game in handheld mode is a fun way to celebrate the release of the new version of the title.

Below you can check out the launch video for yourself. For more on Cuphead, be sure to read our coverage of the game’s upcoming DLC, recent free content update, and 3 million units sold milestone.