During a panel at Reboot Develop 2019 in Dubrovnik, Croatia, Bungie engineering lead Luis Villegas talked about the changes the studio made to improve its leadership.

Interestingly, Villegas started the panel by showcasing the growth of the team since 2008, when they were still working on the Halo franchise.

At the end of development of the original Halo, the headcount was about 60, and then it kept growing until it dropped slightly last year, but it’s still almost 700 employees. 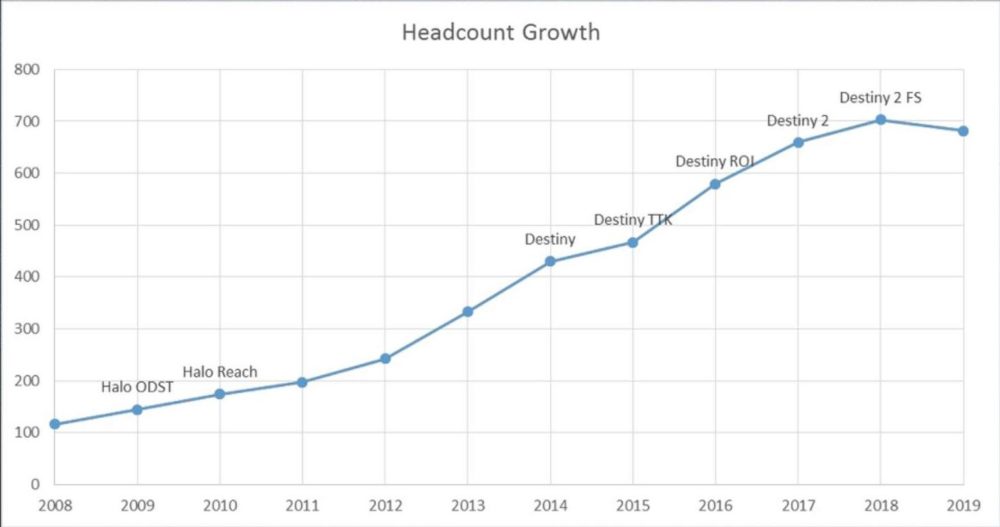 Before 2015, the team had a traditional structure, with each discipline’s lead at the top of the team handling that aspect of development. They needed to wear “multiple hats” understanding product, scheduling, career development, cross-team coordination, and how to help their developers improve at their craft.

Yet, in 2015, after the release of Destiny (which was the studio’s first game-as-a-service), Villegas explains that the studio wasn’t ready for that. It became clear that the structure they had in place wasn’t going to properly scale for the ongoing development of new content.

There were multiple DLCs and expansions in development at the same time, and those teams all “hammered” the discipline leads, and multiple leads all needed to align on those tasks.

Bungie had to change the development process so that it could be scaled to over 400 people working on the same game. The model that they ended up with is called “Scaled Agile” and was inspired by Spotify. The model Spotify used wasn’t a perfect fit, but Bungie adapted it to its needs.

For instance, for Rise of Iron they had multiple fully-self-sufficient small teams with five to ten people each focusing on an aspect of the project, and each had developers from multiple disciplines within, so they could deliver their feature by themselves. Processes were added to make sure that the work of each team would align over multiple layers.

As a result, each employee didn’t have a single lead to respond to, but multiple with different responsibilities.

Managers were responsible for three to six people working on the same discipline, but potentially across different teams. They managed career development, craft mastery, and employee morale. They also worked closely with each other to solve potential broader issues.

Product Owners were the vision holders (they just held it, didn’t create it. That’s the Creative Director’s job), responsible for managing the product’s roadmap, the backlog, priorities, and cross-group coordination. They weren’t dictators but worked with the team to find the best way to fulfill the vision for the product.

Scrum Masters were facilitators. They were responsible not only for running the practices but also for improving them for the sake of team health.

The Leadership Team was responsible for creating the vision and its pillars, overall organizational health, and long-term strategy. They ran as one of the agile small teams themselves.

Bungie wanted to move away from the idea of leaders as “bosses.” They adopted a concept called “Servant Leadership” by Robert Greenleaf, which defined leaders as people who support other employees instead of controlling them.

Bungie also realized that leadership should be treated as a craft in itself, and leaders should be encouraged to consistently improve that craft. Leaders were also encouraged to have 1 on 1 sessions with employees weekly, and those were all about the employee’s needs, happiness, and feedback.

Come 2018, Bungie had shipped many projects with this Scaled Agile model, and employee satisfaction with managers was positive and trending upward. While the high-level organization had changed a couple of times, the core agile process hasn’t changed much and the people-centric culture is still in place.

A core value at Bungie is “Strong ideas weakly held” encouraging developers to attach as hard as they can to ideas they’re passionate about, but be ready to let go of them the moment they find something better.

Yet, not everything has been perfect and some challenges have emerged.

Even though splitting the leadership hats worked well conceptually, this posed a challenge with purpose and fulfillment for the leaders themselves. Having multiple leaders to work with also could sometimes have a demoralizing effect on employees, especially of those leaders were not perfectly aligned. On top of that, actually training leaders was a challenge in itself.

In order to solve those issues, the leadership positions were realigned so that at the end of the day the leaders could point at something on the screen and say “I helped build that.” This helped to realign their sense of purpose. Bungie also worked on driving alignment among leaders and worked with human resources to address improving leadership training, even if this had a cost in terms of time and resources.

During the Q&A session, Villegas also mentioned that it’s perfectly fine for developers at Bungie to try becoming leaders and possibly failing at it. If that happens, they can simply go back to do their previous job without further issues or consequences. The company is conscious that leadership is stressful and a very personal journey, and it’s ok not to be able to do it. Potential leaders are also encouraged to find mentors to learn the craft.

Interestingly, we also hear that about 30% of the development workforce is managers and leads, split across five different levels.

The studio holds fully anonymous surveys among employees every six months in order to learn how they feel about management, product direction, their teams, senior leadership, and more. This has been done for about two years now and helps the studio measuring the effect of changes and the trends of employee satisfaction.

There are also meetings in which the CEO sits down with leaders at a certain level in order to learn what’s going on with the teams, and that tends to spark a healthy dialogue. After that, those leaders sit down with the leaders of the next level to get more granular feedback.

If you’re not familiar with Bungie’s work, you can read our review of Destiny 2.