Last night, Sony gave its first State of Play livestream, sharing the latest news and announcements of titles coming to PS4 and PSVR.

We got some great announcements, including No Man’s Sky’s PSVR support in its Beyond update, Iron Man VR, Five Nights at Freddy’s VR, ReadySet Heroes, a new cinematic trailer for Days Gone, and some PS4 exclusive retro content for Crash Team Racing Nitro-Fueled.

PS4 announcements, that was a given. The amount of PSVR announcements made during the short 25-30 minute presentation, on the other hand, less so.

The reason the amount of PSVR announcements caught me off-guard was because I was wholly expecting a PS5 announcement later this year, with a release sometime in 2020, as the industry rumor mill has seemed to suggest.

Considering the current success of PSVR, it seemed inevitable that a PSVR 2 would release alongside it. Offering improved resolutions on its screen, a comfier, more lightweight feel, better, purpose-built VR motion controls, and for the love of god an easier set-up.

If you hadn’t guessed, that last point there was my biggest gripe with PSVR. In fact, I absolutely adore virtual reality as a medium, and think there’s plenty of potential for groundbreaking immersive experiences within the tech. However, as someone who doesn’t have a whole lot of space to set up any more tech in a small room, having a peripheral that has more cables and connectors than my PS4 itself is a huge turn-off for using it.

Let’s just take a quick look at the abomination of cables required for set-up. 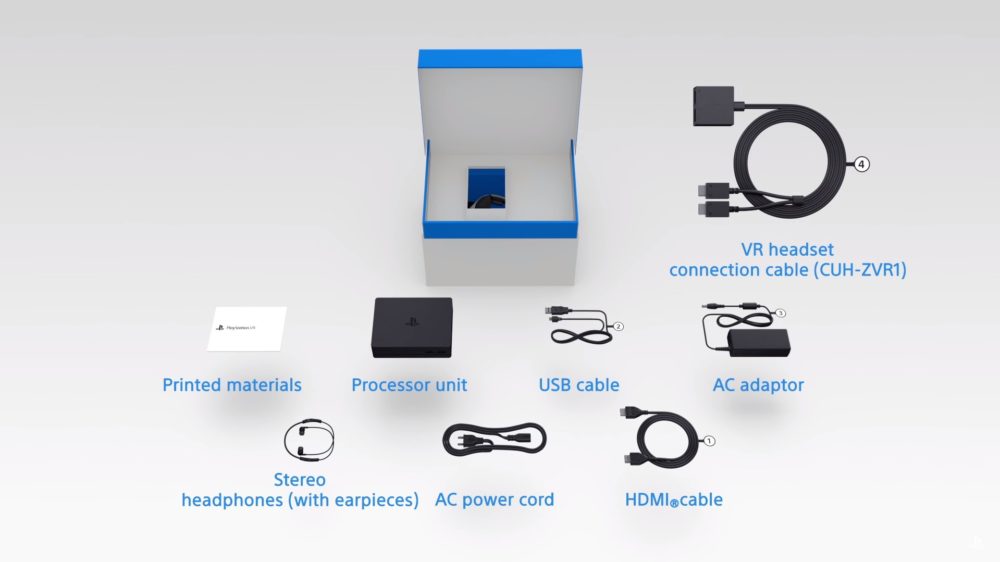 Laid out in such a clean format as Sony has done in its Set Up Tutorial Part 1 video (of three!!!) it doesn’t look too bad.

But consider you’ve got to have an additional PlayStation Camera, your power and HDMI cables for your PS4, and then all of this on top, and the whole thing becomes insanely messy. Particularly when that VR headset connection cable is like having an enormous, heavy braid permanently attaching you to your PS4.

And if you want to watch play your normal games in HDR with the launch day PSVR Processor Unit plugged in? You’ll have to dig around behind your set-up to unplug one HDMI from the unit back into the back of your PS4 directly.

It’s a whole thing and one that, admittedly, got marginally better with the release of the PSVR refresh at the end of 2017.

Toss in the fact that this processor unit now allows for HDR pass-through, and we’ve got a slightly less outdated feeling VR headset.

Even so, in comparison to the likes of the upcoming wireless Oculus Quest, Oculus Rift S with a single USB cable, and the HTC Vive Cosmos promising to be “easy to set up,” all of which are due to launch later this year, the PSVR set-up feels archaic, and ultimately, it’s a turn-off to play the myriad of excellent-looking titles I’ve still not got around to experiencing.

Not everyone’s going to be in the same spatial circumstances as I am. However, there’s probably some other PSVR owners who find the myriad of cables and connections required to play a VR game, more often than not for a few hours in a quick session to be too burdensome.

I guess where I’m trying to go with this is that, while the 2017 revision of PSVR was all well and good back then, it’s feeling outdated once again in comparison to the competition that offers superior, albeit more expensive hardware.

With a slew of new PSVR titles due to release in spring and summer of this year, Sony clearly still sees value in its virtual reality headset, but is seemingly reluctant to make any further improvements or revisions to the design of the hardware without officially announcing the next generation product. Something which, understandably, would require more processing power to enable the medium to evolve.

Come on, Sony. We’re in 2019 now, where wireless earbuds are all the rage, wireless charging from device to device is the new emerging trend, and basically, the common consensus is that we should do away with wires wherever we can.

As great as the lineup of PSVR titles looks, I wish Sony had announced one final revision of the original headset before bringing us a true successor alongside the PS5.

However, with the clock ticking ever closer to a PS5 (and possibly PSVR 2) announcement, that pipe dream continues to sail off into the distance. At least that won’t require a spaghetti junction of cables and connections… right?