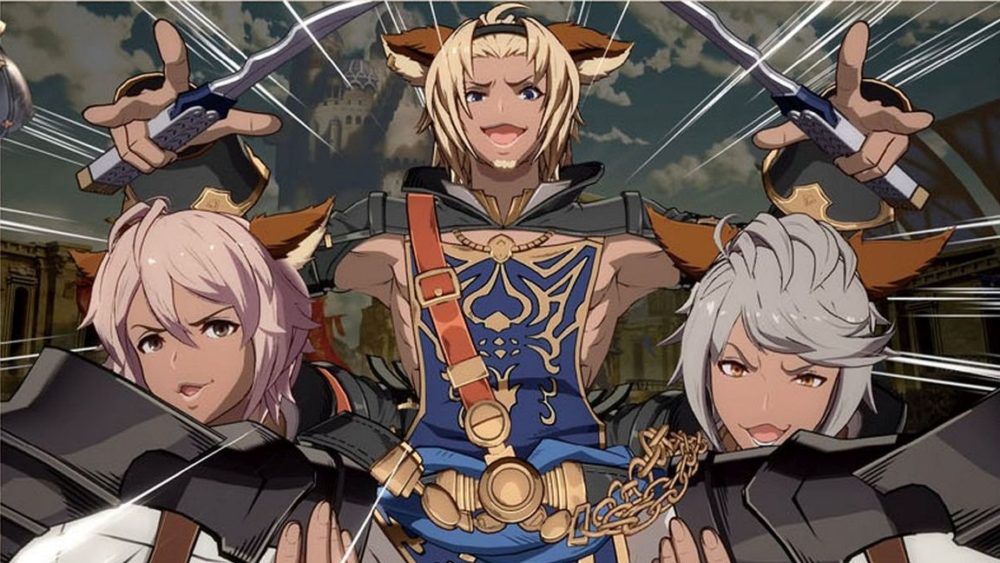 The screenshots feature the latest character revealed for Versus, Lowain, alongside his buddies Tomoi and Elsam, and the summon Yggdrasil who will also appear to help.

The accompanying interview was with Producer Yuito Kimura and Director Tetsuya Fukuhara, who talked about the whole franchise, including the mobile game and the upcoming PS4 games.

An interesting detail from Kimura-san about the Granblue Fantasy mobile game is that he’d like to implement a “guide” feature, helping beginners out in learning how to do things. Funnily, he’d also like to include a pet room where players can keep cats, dogs, birds, hamsters, and more.

Moving on to Granblue Fantasy Versus, Kimura-san mentioned that the developer would like to provide fans with a chance to try the game before launch, so they should look forward to it. While he doesn’t say that explicitly, this could be a hint to the possible release of a demo.

Talking about Granblue Fantasy Relink, it’s currently in development mainly at Cygames Osaka. The new team has inherited what has been co-developed with PlatinumGames as it is, and it isn’t going to change much.

Fukuhara-san admits that the development pace temporarily slowed down with the handover from PlatinumGames, but currently, the Cygames Osaka team reached by itself the number of developers that were involved when the game was co-developed with PlatinumGames. Since Cygames is continuing to increase the size of the staff, the speed of development will further increase going forward.

Kimura-san feels that it’s going to be a fun game, so fans should look forward to it.

Fukuhara-san concluded the interview mentioning that he’d like to keep going with Granblue Fantasy’s service (talking once more about the mobile game) until all of the Twelve Divine Generals appear, and Kimura-san jokingly added that he’ll continue to do his best so that he doesn’t have to implement them all at once.

At the moment only five Divine Generals have been released (the last of which was Kumbhira to celebrate the year of the pig at the beginning of 2019). Since they’re released annually, looks like we have a long way to go.

If you want to read more about Granblue Fantasy Relink and Versus, you can check out our own recent interview with Fukuhara-san.