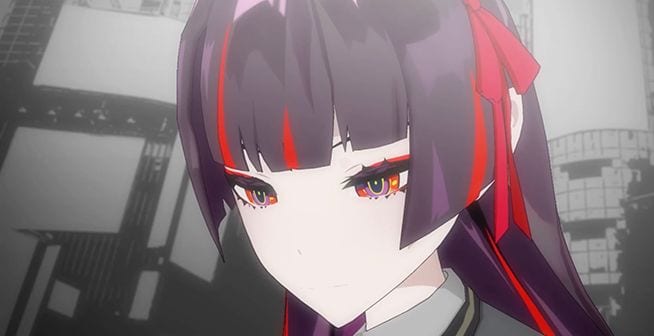 The trailer focuses on one of the game’s heroines, Karen Nikaido. You can get to know her better thanks to an official description from the official site.

“A quiet and mysterious girl.
Calm but strong-willed. Wears a red ribbon as her trademark.
Moved in when she was in elementary school. She was alone until Sakurai invited her into his group of friends.
In the “Chronos World”, she acts curtly against Sakurai but…”

Karen is voiced by super-popular actress Yui Ishikawa, whom you may know for her roles as 2B in NieR: Automata, Phillia in the Sword Art Online games, and Mikasa in Attack on Titan.

If you’re not familiar with the game, it was funded with of a successful crowdfunding campaign on both Kickstarter and Campfire last year. It’s directed by Haruki Kashiwakura of “Expelled from Paradise” fame, while Sword Art Online Producer Kazuma Miki is also working on the game in the same role. The scenario is written by Kou Segawa (Konya, Kimi ni Korosareta to Shitemo), while LAM takes care of the gorgeous character design.

You can check out the trailer below. If you want to see more, you can also enjoy another featuring hero Kyosuke Sakurai.

The game will release on PC (with Oculus or HTC VIVE) on March 20, while the PlayStation VR launch is coming in July.