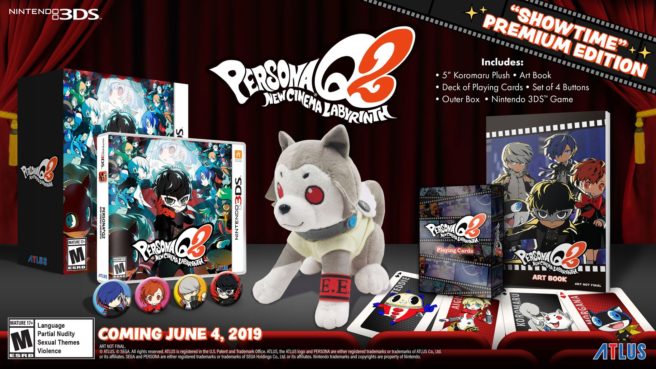 Persona Q2: New Cinema Labyrinth is officially coming to the West with a June 4, 2019 release date.

The release date was announced via a new trailer that showcased the games unique art style. Though no gameplay was shown and more than likely this is just the game’s opening cinematic.

You can view the trailer here with credit to IGN.

As with the first release in the Persona Q series, this is a crossover title that will see the characters from Persona 3 and 4 working together. The main draw to Persona Q2 however, is the addition of characters from the latest entry in JRPG series, Persona 5.

The game is set to revolve around the Phantom Thieves (Persona 5) finding themselves trapped in a series of dungeons based on popular movie genres. Along the way, they will meet the cast of past Persona titles and work together to overcome the labyrinths.

Along with the trailer and release date, a special collectors edition was shown. It will be called the Showtime Premium Edition and include:

The Premium Showtime Edition will cost $69.99 however, you can snag the standard edition of the game for $39.99.

Persona Q2: New Cinema Labyrinth came out in Japan last year and until now has only been teased for a U.S. release.

It was expected however that we would eventually see the game leave Japan given that the first game Persona Q: Shadow of the Labyrinth had come to the West and was mostly well-received.

The Persona Q games are different than the main-line Persona titles in that the gameplay relies heavily on first-person dungeon exploration.

Battles remain turn-based and you can assemble your party how you see fit. Just expect a lot of dungeon crawling if you haven’t played the first game.

So far it doesn’t look like any retailers are taking pre-orders for Persona Q2: New Cinema Labyrinth, but you can look forward to playing it exclusively on the Nintendo 3DS June 4, 2019.