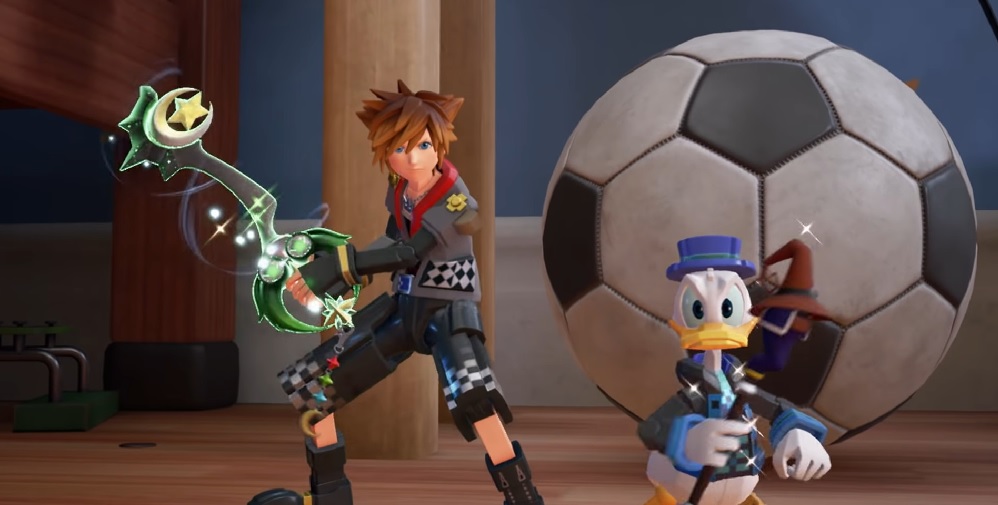 Much like other big releases, the title has its fair share of pre-order bonuses attached to different retailers and editions. Here are all Kingdom Hearts 3 pre-order bonus Keyblades you can get.

Kingdom Hearts 3‘s long awaited release is nearly here, the title arriving on both Xbox One and PS4 at the end of the month. The final chapter in the Dark Seeker saga sees the return of beloved protagonist Sora, alongside other familiar faces such as Donald Duck or Riku.

Pre-ordering any edition of Kingdom Hearts 3 on Amazon will get you the Dawn Till Dusk Keyblade as DLC. A reskin of the Kingdom Key, which you may know from previous Kingdom Hearts titles, it sports a black handle, green and orange guard, with sun and moon decorations at the top and bottom.

The keyblade has the Fire Up ability which, as the name suggests, increases the damage of fire attacks and the Firagan situational command.

The Midnight Blue Keyblade is a pre-order bonus exclusive to the PlayStation Store. Midnight Blue is a palette swap of Star Seeker, another Keyblade familiar to players of past titles. It has a black handle, with a blue star at the end of the pommel.

Two interesting details stand out: the blue buttons on its guard, resembling those of a PlayStation 4 controller, as well as the blue color of its blade. Its Blizzard Up ability increases the damage of blizzard attacks and Blizangan.

The Phantom Green Keyblade is the pre-order bonus keyblade exclusive to the Xbox One version of Kingdom Hearts 3 purchased from the Microsoft Store. This, too, is a Star Seeker pallete swap, albeit Xbox-themed. It dons a black handle with a golden star near the pommel.

Its green guard has on it two green crystals inside silver circles, while its blade is grey. Its keychain’s links are colored red, green and blue, similar to the B, A and X buttons of the Xbox One controller. The Phantom Green’s Thunder Up ability increases the damage of thunder attacks, as well as Thundangan.

That’s everything you need to know about all the Kingdom Hearts 3 pre-order bonus Keyblades you can get.

Our Kingdom Hearts 3 Wiki has answers to a large number of other questions related to the latest entry in the series, including whether or not Kingdom Hearts III is open world, what the install size is, as well as all Golden Herc figures locations.