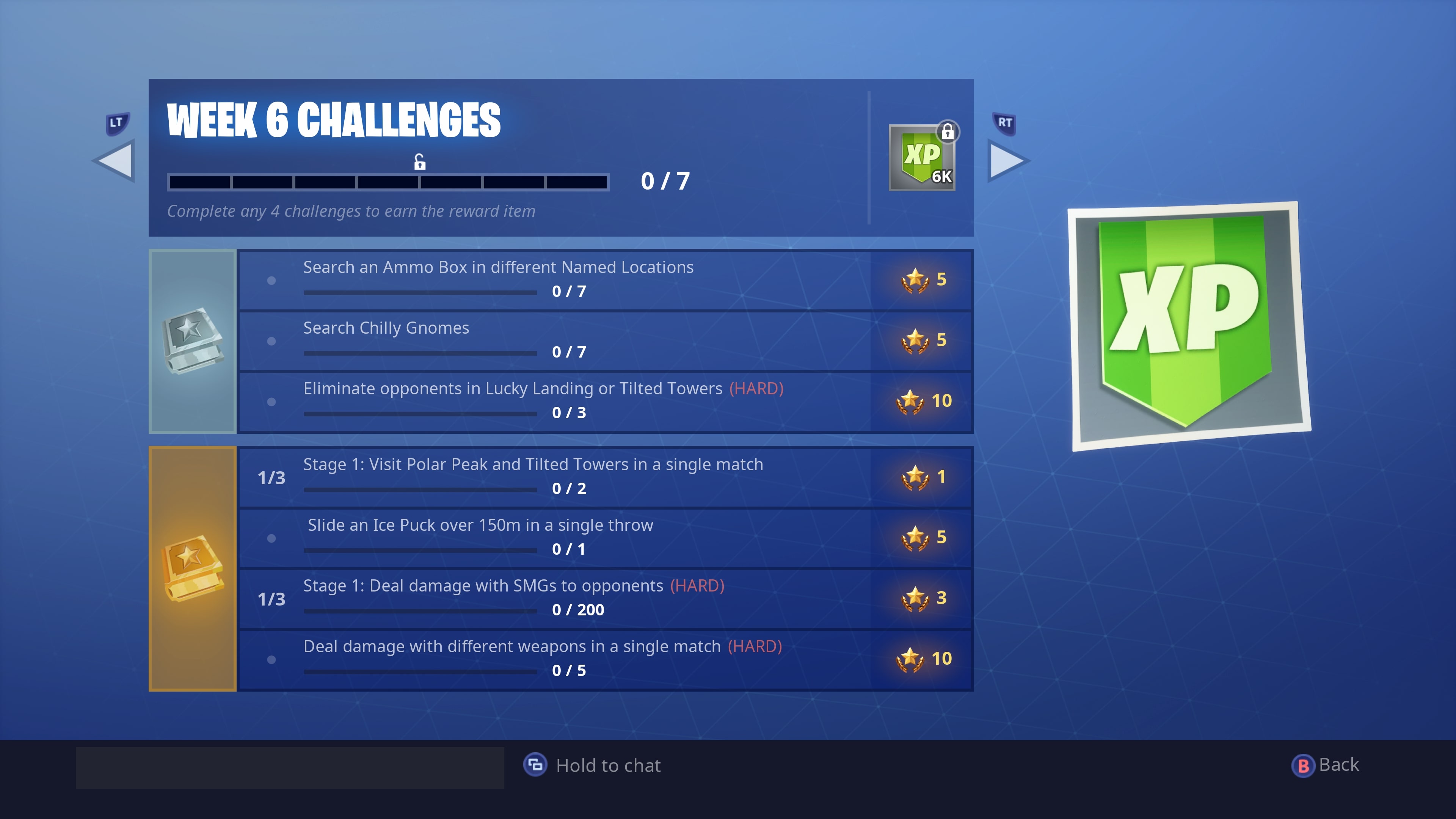 How to Complete the Fortnite Season 7 Week 6 Challenges

What the Challenges Are

There have been a number of leaked week 6 challenge lists making the round this week, with one pretty massive error. Many of them, in their third stage for the ‘Deal Damage with … to opponents’ list Clingers as a weapon that can be used. Considering Clingers were removed from the game at the beginning of Season 7, this seems wrong.

As such, we’ve included a screenshot above of the entire week 6 challenges list from Fortnite, so you know the list we’re talking about is correct. Though, keep in mind, that Clingers challenge is the third stage, and so won’t be shown in the above image.

How to Complete All Fortnite Week 6 Challenges

For the deal damage to opponents week 6 challenges, you’re simply best hopping into a Duos, Squads, or large team LTM mode. When an opponent is downed, you can use the required weapon for the challenge to finish them off, dealing roughly 100 damage depending on how long they’ve been downed for.

Do this a couple times for each weapon type and you’ll have this first week 6 challenge finished.

Moving on to the next of the week 6 challenges in Fortnite, you’ll then need to deal damage with different weapons in a single match. The best way to do this is pick up whatever weapons you can as soon as possible and then deal damage with multiple weapons on a single enemy.

For example, deal Assault Rifle damage from range, then a quick blast of the shotgun followed by a burst of your SMG and that’s three weapons in a single skirmish. Throwables can also be an easy additional weapon you can deal damage with, so don’t overlook these. Again, non-Solos game modes are best for these kinds of challenges.

Eliminating opponents in Lucky Landing or Tilted Towers is pretty self-explanatory, but always go for a floor weapon over a chest if you’re planning to land on these locations and get your eliminations during the early stages of a game. Meanwhile, we’ve got you covered with the Chilly Gnomes locations in Fortnite with a complete guide here, too.

As for the Ice Puck challenge, you’ll need to have reached Tier 28 in your Battle Pass. Once you’ve unlocked this, we recommend heading to the icy lake in the southwest section of the map where Greasy Grove used to be. Ensure you’ve got plenty of clear space ahead of you and aim away.

Finally, the visit different named locations staged challenge can be completed fairly easily by using the various ziplines and vehicles littered around the world. Heading to Frosty Flights to get an X-4 Stormwing plane and then heading to each pair of locations is an easy way to get these done nice and easily.

We’ve even run through the chest locations for Frosty Flights, Happy Hamlet, and Polar Peak, just to name a few.