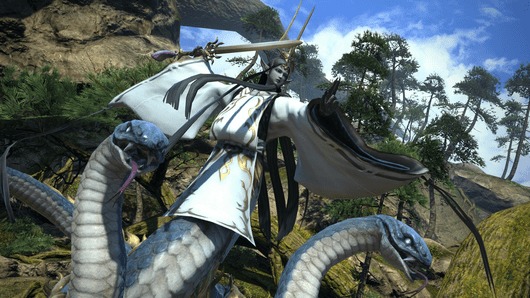 How to Start The Wreath of Snakes (EX) Trial in FFXIV Patch 4.5

Patch 4.5 is finally out for FFXIV, which means there’s tons of new content to dive into today. Aside from the continuing the main story, players will also be able to progress in the Four Lords side story, which gives you access to some of the game’s more challenging trials for sweet rewards. Here’s how to start The Wreath of Snakes (EX) trial in FFXIV patch 4.5.

Just like the previous trials, there’s a normal, story mode version of the trial, and an Extreme (EX) version. Before you can start farming the EX version, however, you’ll need to clear the normal trial first.

In addition to that, it’s worth noting that the normal trial has an item level requirement of 365. The best way to catch up quickly is by turning in Tomes of Genesis at Rhalgr’s Reach for 390 gear, or doing the Alphascape raids for Omega parts, which can also be exchanged for high level gear.

With patch 4.5, the weekly gear restrictions for Alphascape have been lifted, so this is a much more efficient way of getting better gear since Genesis Tomes still have a weekly cap.

In order to start The Wreath of Snakes (EX), you’ll need to have completed the normal version first, then talk to the Wandering Minstrel in Kugane (X:11.6 Y:12.6) to unlock the Extreme version.

The EX version has an item level requirement of 380, so get ready to grind for Genesis Tomes or do Alphascape Savage raids to catch up.

That’s all you need to know about how to start The Wreath of Snakes (EX) trial in FFXIV patch 4.5. Be sure to search for Twinfinite for more FFXIV-related content.

Question: How do you start The Wreath of Snakes (EX) trial in FFXIV patch 4.5?