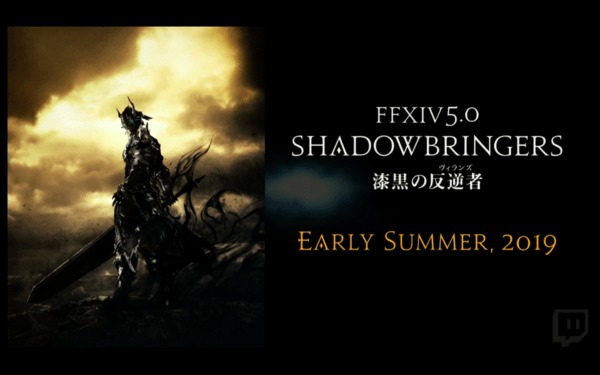 Called Shadowbringers, the expansion will see the Warrior of Light, become the Warrior of Darkness to combat a threat that will exceed the Calamity, and finally once and for all, take the Garlean Empire head on.

It will also feature multiple new jobs. , producer Naoki Yoshida seemed to imply that a Gunblade job was incoming based on evidence seen in the trailer. Thancred was carrying what looked very much like a Gunblade.

Update: President and CEO of Square Enix Yosuke Matsuda, walked out in a Blue Mage outfit, and confirmed Blue Mage.

Update 2: WOW and it’s coming for 4.5! Will be a “limited job”, it seems that experiences are designed specifically for it.

A lot of the content you would expect from a Final Fantasy XIV was shown off during the Shadowbringers reveal stream. There will be new raids, beast tribes (including the Nu mou), a level cap raise to 80, and new & reorganized job actions.

Some new features were announced as well, including a new FFXI-like “Trust” system, and an end-game activity for gatherers and crafters that will allow them to rebuild Ishgard to its former glory. The possibility of Ishgard housing was also hinted at, but not confirmed.

There will also be a new playable race. Although not officially confirmed, it was jokingly overly hinted at during the live stream thanks to the Bugs Bunny shirt that Yoshida was wearing that they kept zooming in on.

We’ll update this developing news story as the livestream plays out.