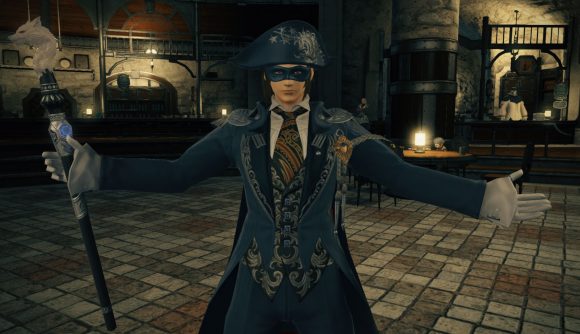 Normally, when new jobs are introduced in MMORPGs – especially ones like Final Fantasy XIV, which usually pulls from a list of iconic jobs from the FF series – it’s cause for celebration.

Blue Mage has consistently been one of the most requested jobs over of the course of the last few years of FFXIV. This was amped up even further once Samurai and Red Mage – two incredibly iconic jobs – finally got added to the game as of Stormblood.

Shockingly, revealed during the Shadowbringers announcement keynote, Blue Mage will be out by patch 4.5, releasing early next year.

The hold up has always been that Blue Mage, if FFXIV producer Naoki Yoshida wanted to stay true to the job’s tradition, is incredibly difficult to jam into the FFXIV’s very rigid party and raid structure.

Blue Mages, for the unfamiliar, are known for learning attacks from enemies either by defeating them, absorbing them, simply getting hit by it, or some kind of combination of the three.

It has seen the light in MMORPGs before. It was added in Final Fantasy XI way back in the Treasures of Aht Urghan expansion in 2006.

FFXI’s take on the job was well-received. Throughout its life, it has generally been extremely powerful, versatile, and very fun to play once you get past the grind of needing to learn easily over a hundred spells.

It usually functioned as a damage dealer (DPS) class, but with the right spell combinations, could be a half-way decent healer, tank, and support class as well. It was limited only by your creativity of how you wanted to combine all of the different spells.

Many fans, especially those that enjoyed Blue Mage in FFXI, wanted that for FFXIV, as unlikely as it seemed for a while. To their credit, Yoshida, and the FFXIV dev team actually seemed faithfully brought Blue Mage over to FFXIV, which was unexpected.

The problem for many then is that it’s going to be “limited.”

The development team, instead of compromising Blue Mage to fit neatly into a DPS, healer, or tank role, decided they were going to just not try to fit it in at all.

They are using a new term called Limited Jobs to describe Blue Mage, and any other job they want to add in the future that doesn’t fit the holy trinity paradigm. Beastmaster and Puppetmaster got briefly mentioned as future candidates.

At least for Blue Mage, they are viewing it more as a solo experience. It cannot use the duty finder for anything other than Blue Mage-only events, and can only participate in some pre-made party activities like Dungeons.

If that was all, it probably would be palatable, but Blue Mage ( at least at first) will be capped at level 50, severely limiting what events it can actually be useful for. The level cap will rise over time, but the timeline for that is unknown at the moment.

When Blue Mage was first announced on Friday, it was a frenzy. The fans that were at the panel or watching on Twitch were hyped! A new mid-expansion job that was going to be released at the next patch? Crazy!

However, you could hear the air being sucked out of the room when Yoshida started talking about it being “limited.”

The next day, another panel confirmed the fears that many in the player base had: Blue Mage couldn’t be used for all of their favorite activities. Some players are even going so far as to call Blue Mage a glorified mini-game of sorts.

This has split players into two very distinct camps. There are those that think this is an unmitigated disaster, almost like a mini-Diablo Immortal level gaffe.

They are angry that a job that has been wanted for so long is finally getting added, but they can’t do anything meaningful with it. Upset to the point where they would have rather have had it watered down if this was going to be the alternative, or not even added into the game it all. They’re calling it a waste of dev-time.

Then, you have those that are happy just to have Blue Mage in the game at all. Recognizing that it was either this limited way or nothing, they’ll happily take the limited job option; appreciative that Yoshida is trying to add something that people have requested in a way that is true to long time Final Fantasy fans.

It will be interesting to see how this plays out. It’s unlikely that Yoshida and the development team will do any major changes to their approach between now and patch 4.5, coming out in early 2019.

However, if the feedback starts trending more negative after the content is actually out, they might need to rethink how they were going to scale up the Blue Mage to more relevant content.

A compromise would seem to be to keep Blue Mage out of duty finder, which relies on the pre-set roles such as DPS, tank, and healer, but at least allow Blue Mage to be used in pre-made parties for relevant content.

If it was under-powered but at least doable, it probably wouldn’t ruffle any feathers. The development team would just need to keep an eye on it and make sure it isn’t overpowered.