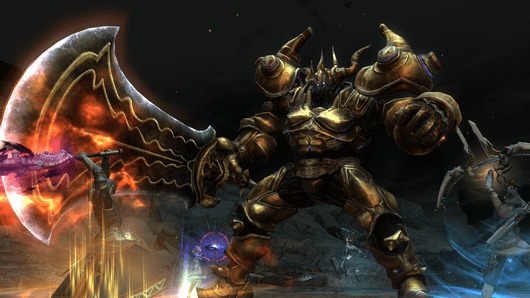 How to Beat All Bosses in FFXIV’s Ghimlyt Dark Dungeon

With the drop of patch 4.5, FFXIV players have a few new Main Story Quests to dive into, and that includes the brand new four-man dungeon, Ghimlyt Dark. Here’s a brief rundown of the Ghimlyt Dark dungeon bosses and how to beat them.

This is a pretty straightforward boss to take on in FFXIV, with one tricky attack you need to look out for.

Ceruleum Vent does raid-wide damage that should be healed through. Exhaust is a straight line AoE that’s pretty easy to dodge. The attack you need to watch out for is Magitek Slash.

Watch the direction of the arrows, then stand at the spot where the last Magitek Slash attack is set to hit (right beside the very first slash). Once the burning floor effect of the first slash attack goes away, immediately stand in that spot to avoid damage from the final slash.

The party should stay close to the boss and rotate together when this happens. Avoid this attack, and taking down the first boss in FFXIV’s new Ghimlyt Dark Dungeon should be a relative walk in the park.

There are two main AoE attacks you need to watch out for: Oil Shower and Needle Gun. Needle Gun is a frontal cone AoE attack that’s easy to avoid. However, Oil Shower is a very large cone AoE that will hit everyone standing behind the boss. Stay close and dodge as these attacks come up.

This Ghimlyt Dark Dungeon boss also has a move called Nitrospin that will hit the entire party.

Every now and then, the boss will dig into the ground and disappear. It’ll always reappear by dealing damage in a straight line to the middle of the field. However, it’ll also summon markers at the corners of the room, making the middle spot the only safe area.

Stack in the center and wait for the markers to disappear, then immediately get out of the middle.

You’ll fight these bosses one at a time, with the secondary boss firing off AoEs from outside the arena.

Fairly straightforward fight, but watch out as a player will occasionally get marked. Move away when you get marked, wait for the tether to disappear, then go back to the fight.

In between phases, you’ll see golden lines zipping across the arena. Stay out of their paths to avoid major damage. Some players will also get targeted with AoE attacks during these transitions. Direct the attacks away from the party while avoiding AoEs. The attacks have a knockback effect, so try to position yourself in a way that will get you knocked away from the AoEs.

In the final phase, you’ll have to fight both bosses at once. Try to keep their health bars even and defeat them at the same time.

And that’s all you need to know about how to beat the new Ghimlyt Dark dungeon in FFXIV for now. Be sure to search for Twinfinite for more FFXIV-related content.

If you’re looking to tackle the new Ivalice raid after catching up with the MSQ in FFIXV, we’ve got you covered as well.

FFXIV is also slated to receive its next major expansion this summer, titled Shadowbringers.

Aside from more story to dive into and a new max level cap, it’s also looking very likely that the Viera race from FFXII will be added to the game. Before the expansion releases, players will also finally get to check out a new ‘limited’ Blue Mage job next week.