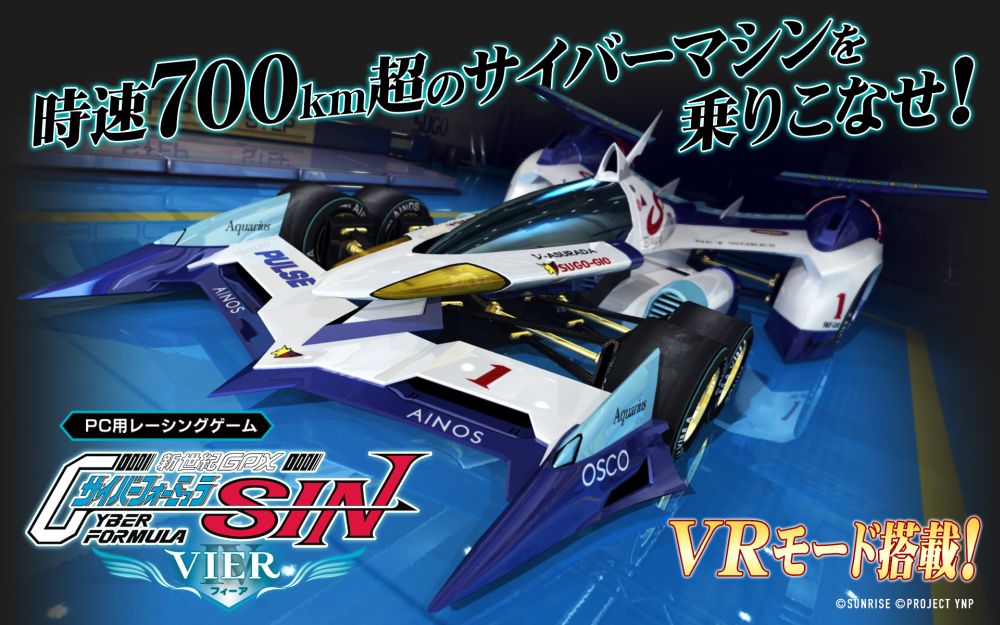 To be more precise, the game is based on the 1998 OVA series Future GPX Cyber Formula SIN. If you’re not familiar with the term “doujin” game, basically it’s an unofficial title created by fans.

That being said, Project YNP has been creating games dedicated to the franchise since 2003, and while this isn’t officially endorsed by publisher Sunrise, it has at least been acknowledged rather officially with a mention on the franchise’s official site.

The problem with the original release in August is that it was only available at select enthusiast and hobby store in major Japanese cities, basically cutting off western fans. Now this has been amended, as Future GPX Cyber Formula SIN Vier has been made available on Steam, including an English interface.

If you’re curious about the game, you can read an official description directly from the Steam listing.

The latest entry in the PC racing game series “SIN” has been released! Make your best lap with the transformation system and the multi-step boost, just like in the “Future GPX Cyber Formula” anime! Become the next world champion!

What’s CYBER FORMULA
A car race surpassing “F1″race once claimed as a peak came into being.
A car race by a machine equipped with pollution-free engine and artificial intelligence “cyber system”. All machines run at ultra high speed, which is unimaginable, and cutting edge technology is equipped to cope with all the harsh racing situations and they are just “a dream machine” The maximum speed exceeds 700 Km / h, a deformation mechanism that manipulates the air resistance, and a boost system that greatly surpasses the usual engine power.
The speed of the machines surprises even God.

GAME SYSTEM
A “deformation system” which freely manipulates the air resistance mounted on the super specification cyber machine, aiming at getting Grand Prix through full use of “boost”
which further boosts its super high speed running!
That driving feeling creates new enthusiasm not found in existing racing games, and the speedy gaming experience fully satisfies you through experience of ultra high-speed race.

VR MODE
In this work, you can enjoy the world of cyber formula race that is realistic in 360 degrees full field of vision in its entirety with “VR mode” installed corresponding to the new topic.

QUALITY
Many unique cyber-machines by Mr. Shoji Kawamori elaborately reproduced with a 3D model over the details run through the circuit at super speed just like the original animation.

ONLINE MULTIPLAYER
As well as single play mode such as time attack and championship, the network battle mode is installed as standard. You can compete with the world’s drivers exactly for “World Championship”.

The game is priced at $29.99 or €24,99 depending on whether you live, and you can check out a trailer and a few screenshots below.

If you’re interested in more anime games, you can check out the recent screenshots of One Piece: World Seeker.