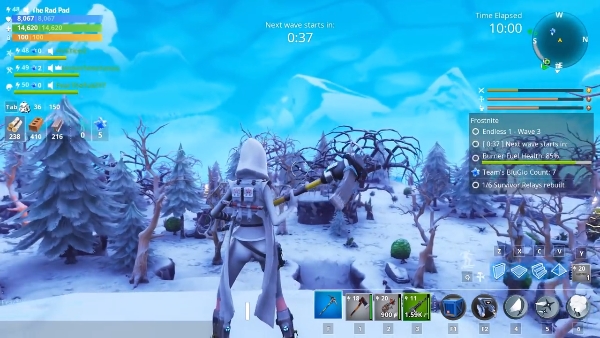 A new winter event is coming to Fortnite’s cooperative Save the World mode called Frostnite, Epic Games announced in a developer’s update video.

Frostnite looks like the typical defense missions found in the game, according to the video, but players are defending a BluGlo furnace that must be continually filled. The action takes place on a snow-ridden map, and the objective requirements shown during the gameplay video seem to suggest it is an endless mode with constant waves of enemies instead of defending for a specific amount of time.

The Save the World winter event will be coming to Fortnite in the 7.10 update alongside a feature allowing players to craft lower tiers of already upgraded weapons, though no date has been announced for the patch. Epic also discussed in the video that act three of the Canny Valley questline would be coming with the 7.0 update later this week.

While no information was announced if the Frostnite event would carry over to Fortnite’s Battle Royale mode, Epic did release a second teaser picture for Season 7 with another icy figure riding down a slope on a snowboard. Battle Royale’s seventh season of new content and the game’s 7.0 update will launch on Thursday, Dec. 6.