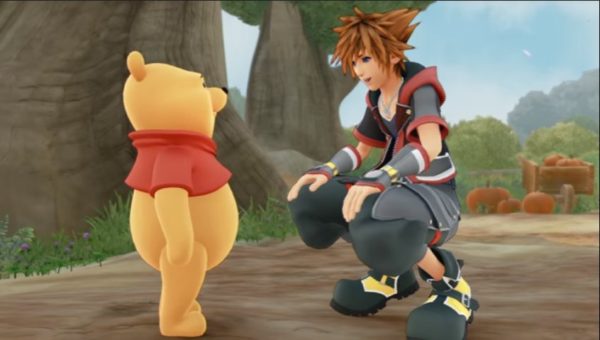 During Microsoft’s XO18 fan event a brand new trailer for Kingdom Hearts III was shown off, giving us the return of the Hundred Acre Wood and that silly old bear Winnie the Pooh. Even though it’s a short minute and a half trailer, there are actually quite a few details crammed in. .

Just like with past Kingdom Hearts games, Hundred Acre Wood will sport a variety of puzzle minigames to play through while Sora interacts with Pooh and company. The world itself sports a kind of cel-shaded look that differentiates it from the other world in the games. Outside of Hundred Acre Wood we get a few glimpses at other worlds, like the lantern scene from Tangled. It also looks like the crew will be fighting a Heartless version of Baymax in the Big Hero 6 world.

Chirithy, the adorable cat creature from the mobile game Kingdom Hearts χ, also makes an appearance, as well as a mysterious bright white world. There’s a scene with Sora, Riku, and the rest of their allies fighting a horde of heartless, and if you look close at the 1:09 mark for a brief second you can catch a glimpse of Axel’s Keyblade.

Finally, at the end of the trailer we see Norted Terra facing off against Lingering Will, the animated armor of Terra’s. Take a look yourself and let us know what your favorite parts might be in the comments down below.

Kingdom Hearts III launches on Jan. 29, 2019 for PS4 and Xbox One. If you missed the latest trailer showing off more of the Tangled World you can that here, or look at screenshots showing off Olympus and Twilight Town.