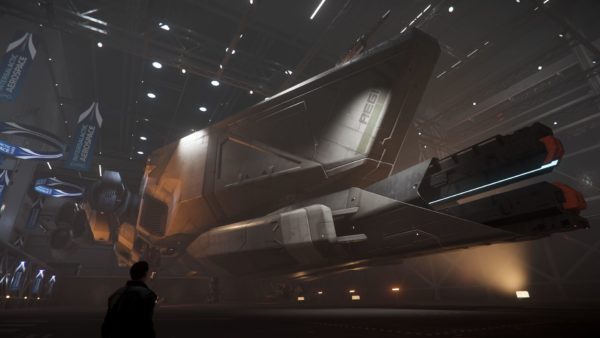 Star Citizen has been celebrating another anniversary with the Intergalactic Aerospace Expo, and today there was a surprise with the opening of Aegis Dynamics’ showcase. An entire hall was dedicated to the Idris frigate.

The Idris is the biggest ship to make an appearance in a public build of the game, and while it isn’t flyable just yet (even if today everyone will be able to try the still-massive Aegis Hammerhead and Reclaimer), it’s a great way to get a real look at what we can expect from capital ships in terms of size.

In the gallery below, you can enjoy a few screenshots of this 242 meters-long monster. It requires eight players to be flown effectively and it can be controlled by up to 28 people. It can even carry its own player-controlled fighters.

If you want a good idea of its size, just take a look at the screenshots with a close-up of the massive landing gears.

Mind you, the Idris’ record may be short-lived. Tomorrow Cloud Imperium Games will open the Drake Interplanetary showcase and the recently-released Kraken light carrier could make an appearance. With 270 meters from stern to bow, it beats the Idris by almost thirty.

Of course, neither the Idris nor the Kraken are the biggest ships planned to appear in Star Citizen in the future. Larger behemoths will be playable, including the Bengal carrier with its 990 meters from stern to bow.

If you want to see more, you can also check out today’s Aegis Dynamics video below, and and the one about Origin Jumpworks. You can also enjoy a video from yesterday, showing a rather crazy mid-air rescue.

For the sake of full disclosure, please keep in mind that the author of this article is one of the backers of Star Citizen.