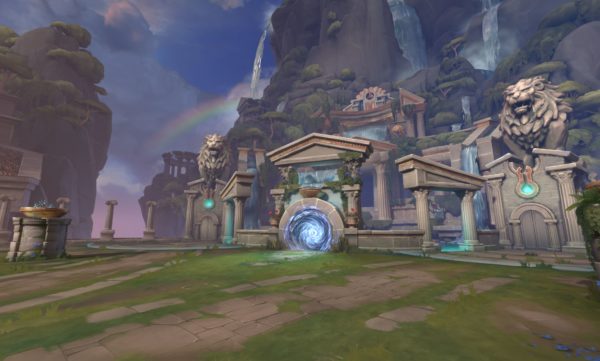 Today Titan Forge Games, Hi-Rez’s studio responsible for developing Smite, has formally confirmed that Smite will be coming to the Switch via a press release sent out to publications including Twinfinite.

We had heard the rumors, and yesterday Nintendo spoiled the reveal a bit, but Titan Forge Games has now made it 100% official alongside some new information about what’s to come for all versions of the game.

Don’t expect to jump in right away though. The closed beta is still a bit away; it won’t begin until Jan. 24, 2019. And, similar to Paladins, it won’t be a free to play affair as far as we can tell, at least not at first.

The Founder’s Pack will be available for pre-purchase on Switch starting on Nov. 16, and that will allow you access into the closed beta for Smite.

While a cost for early admission might be a downer for some, there is some other good news. Cross-play with Xbox One and PC is on the way, alongside Cross-progression between all three platforms that are open to it.

Unsurprisingly, given Sony’s recent stance for all games not named Fortnite, the PS4 version will not include cross-platform play.

Titan Forge Games also announced their plans for heroes #99 and #100. King Arthur and Merlin, are both confirmed to be on the way.

Having not kept up with Smite for a little bit, I’m actually pretty shocked to hear that neither of those characters were in the game already.

According to the release, King Arthur will feature a melee combo system never seen before in Smite, while Merlin will have magical powers of course, across three different stances/elements.

Also confirmed is a new map for Arena which will feature a new enemy: the Minotaur.

Will you be picking up Smite right away? Or are you holding out if it goes free to play like Paladins did? Let us know in the comments below.