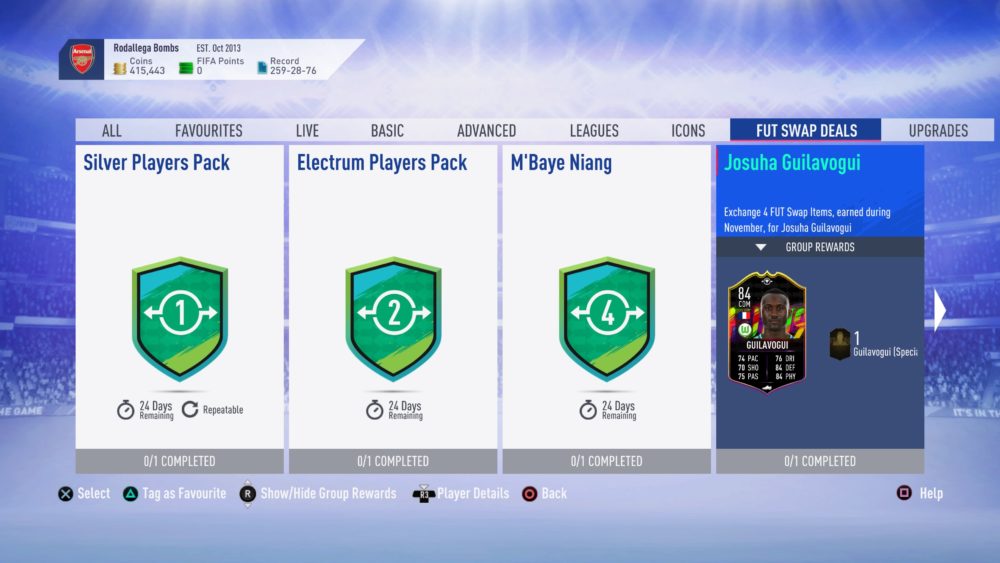 FIFA 19‘s early live content arrived almost every day and was excellent. Recently, though, the promo events have been underwhelming. Now, one of FIFA 18’s best new promos has returned for the second time in FIFA 19. FUT Swap happened once last year, but it seems like EA Sports are planning to implement it throughout FIFA 19. The new FUT Swap players have arrived in the game, and it’ll take quite a bit of work to get them. Here’s everything you need to know about how to get FUT Swap items and players in FIFA 19 Ultimate Team.

If you’re looking for December’s FUT Swap players and how to get the items, check out our new guide.

First of all, here are the four players you are able to unlock from November’s FUT Swap in FIFA 19. They are:

You unlock these players by completing SBCs for them. All you need to do is input the required number of FUT Swap items into the player SBC and you’ll be rewarded with them. Keep in mind that the requirements are slightly higher for November, though. Simply head to the Squad Building Challenges part of FIFA 19, scroll along to FUT Swap Deals, and you’ll see them.

Now for the complicated part of how to get FUT Swap items and players in FIFA 19. Between now and the first week of November, you will be given the chance to earn 14 FUT Swap Items. They will be special versions of players that you can either keep (not that you’d want to) or exchange in the FUT Swap player SBCs.

They will be offered in a variety of ways throughout the mode, such as Objectives, Squad Battles, and SBCs. Below is a rundown of everything you need to do to get the 14 FUT Swap items and players in FIFA 19. It will be updated throughout November as more are released. Keep an eye on Daily Objectives each day too, because they appeared there last month and were easy to miss.

Once you have got enough FUT Swap Items, simply head over to the player SBCs and input them. We will continue to update this list over the next few weeks, so that you know everything about how to get FUT Swap items and players in FIFA 19. Be sure to keep checking back for more info.