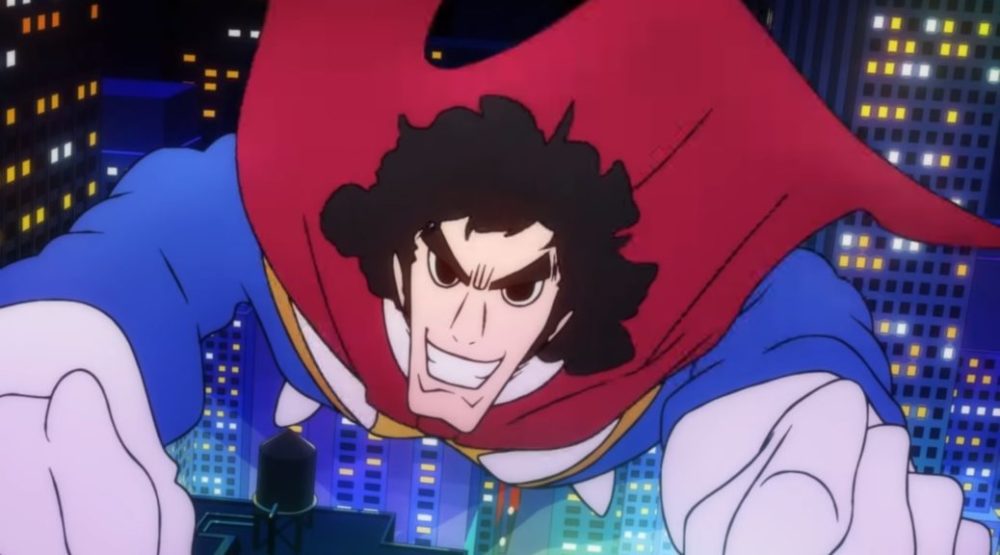 As Persona Q2: New Cinema Labyrinth gets closer, a trickle of new trailers and info has emerged. Today, Atlus released a new trailer featuring Kamoshidaman, a trailer for an in-game movie based on Kamoshida.

The trailer starts with a shot of a stereotypical bad guy terrorizing the city, as a crowd watches. A member of the crowd dressed in jogging pants is not happy with this, so he makes his way to a revolving door, spins around in it, and emerges in costume – That’s right, he’s got the cape and boots to go along with that cheesy smile.

He then crashes into the bad guy to save the day. After that, it cuts to a smaller-scale shot of what it will presumably look like on the 3DS screen. In it, a series of wanted posters overlay next to a shot of Kamoshidaman, standing much like Superman does. The faces on the posters seem familiar.

The six wanted posters have the faces of our heroes from Persona 5: Morgana (Mona), Yu (Joker), Ryuji (Skull), Lady Ann (Panther), Yusuke (Fox), and Goro Akechi, all in their Phantom Thief masks. It then cuts to a shot of Kamoshida standing next to Makoto (Queen) and Haru (Noir) who have both been tied up, shedding light on the true evil nature of Kamoshidaman.

We finally get a glimpse at a boss battle involving our heroes from Persona 5 and Kamoshidaman, in traditional Persona Q fashion. Each dungeon in Persona Q2: New Cinema Labyrinth will revolve around a different movie, hence the name. Kamoshidman comes across as a hero, but if you’ve played Persona 5, you know he’s anything but that.

Persona Q2: New Cinema Labyrinth will release Nov. 29, 2018 in Japan. There is no release date for other regions at this time, but we will let you know as soon as one is announced.