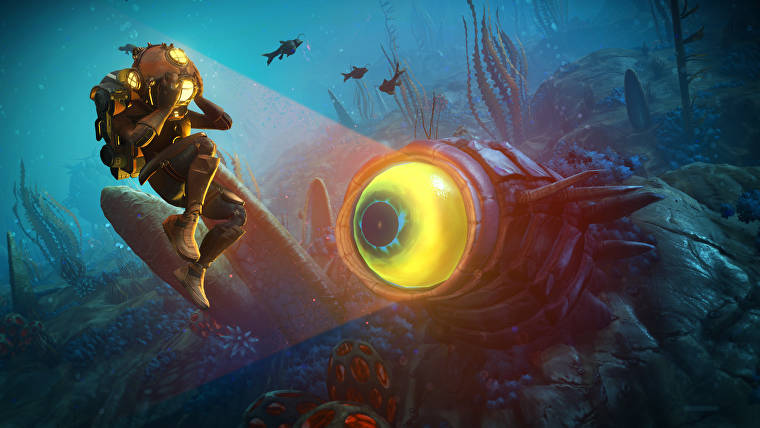 No Man’s Sky continues to grow thanks to its newest update titled The Abyss, and a new trailer offers players a glimpse of what it has in store.

Streamed by PlayStation via YouTube, the trailer goes in depth on the many changes update 1.7 will bring. Focused on underwater exploration and crafting, The Abyss gives players several new options in how they explore, harvest from and build structures within underwater environments, which have received major graphical enhancements and refinements compared to previous versions of the game. A new jet pack-propelled diving suit and submersible vehicle will allow them to journey across the sea floors and through underwater caverns on most any water-filled planet, and during their travels they’ll find new deep sea fauna and meet plenty of new underwater creatures both friendly and vicious thanks to the updates increase to biome variety by five times.

Likewise, players can create underwater structures that better utilize whatever they discover beneath the water’s surface. Sea creatures can be brought back to a player’s underwater base of operations and added to a decorative aquarium, fleshing out their submerged abode however they see fit.

There is also a story mode, titled Dreams of the Deep, tied to the update. Through it, players can uncover ancient underwater temples to learn more about long-dead alien races, where they went and how they’re tied to the fate of a stranded freighter crew.

The Abyss is the latest update brought to No Man’s Sky. Originally released Aug. 2016, the game has received heavy updates and enhancements from developer Hello Games after a less than stellar launch. Since the introduction of these changes, and especially the 1.5 or NEXT update, the game has continued to gain support from critics and fans as living up to the initial promises and hype around it pre-launch.

No Man’s Sky is currently available on PlayStation 4, Xbox One and PC. For more on the game, check out our feature on the five different types of No Man’s Sky players to determine which category you best fit into.