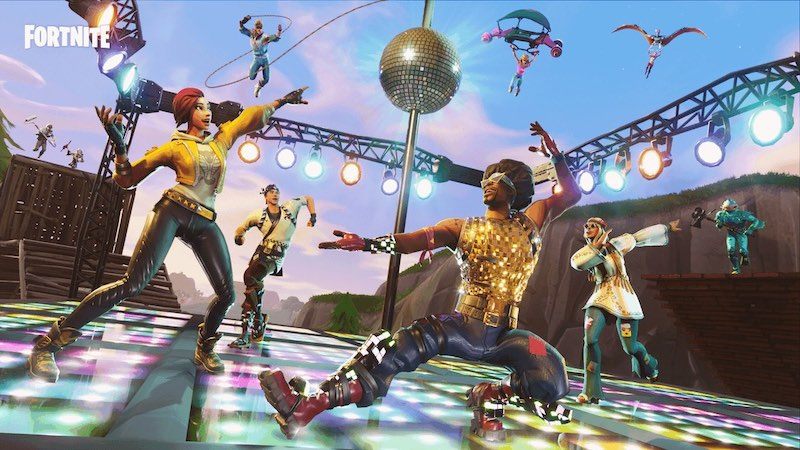 Players will now be able to get their hands on the Quad Launcher in Battle Royale. This weapon can “fire rockets in quick succession towards enemies,” essentially making it perfect for chopping down towering enemy structures in the late game.

The Quad Launcher will be an epic and legendary weapon only, and has a base damage of 80/84 per rocket depending on the rarity. The Quad Launcher will also be found in chests, supply drops, and vending machines. It doesn’t look like you’ll be able to just pick one up off the floor, though.

Patch v6.02 for Fortnite also adds in the new Limited Time Mode, Disco Domination. In this 50 vs 50 mode, players will have to take over dance floors that have appeared across the map by dancing on them. By doing so, the disco ball will raise up and you’ll begin filling the dance bar.

The more players dancing away on one of the five dance floors, the faster you’ll raise the disco ball and fill the the bar. First team to completely fill their dance bar will be the victors.

What’s interesting about the mode is it’s the first time we’ll see respawning in Fortnite Battle Royale, albeit temporarily. According to the patch notes “respawning will be turned on until the third (last) storm circle.”

Finally, Epic Games has also just released the Skull Squad gear into the Fortnite item shop. This scary skin arrives just in time for Halloween festivities, and also comes with its own set of challenges to earn the Ghost Portal back bling.

Patch v6.02 is available now with a return from beyond the grave!

Outside of these headline inclusions in the latest Fortnite update, Epic has highlighted a number of loot rate drop adjustments. Players will be pleased to see the likes of the Legendary Heavy Sniper, Epic Rocket Launcher, and Guided Missile weapons have also seen an increase.

The Rare Grenade Launcher, Rare Semi-Auto Sniper Rifle, and Common Pistol make up the list of weapons that have seen their drop rate lowered in this latest update.

The full v6.02 patch notes can be found over on the Epic site and break down all of the tweaks and additions.

Fortnite is available now on PS4, PC, Xbox One, Nintendo Switch, iOS, and is currently in beta on Android devices.